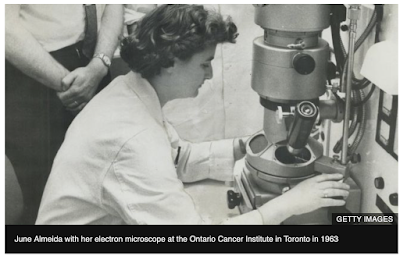 The woman who discovered the first human coronavirus was the daughter of a Scottish bus driver, who left school at 16.
June Almeida went on to become a pioneer of virus imaging, whose work has come roaring back into focus during the present pandemic.
Covid-19 is a new illness but it is caused by a coronavirus of the type first identified by Dr Almeida in 1964 at her laboratory in St Thomas's Hospital in London.
The virologist was born June Hart in 1930 and grew up in a tenement near Alexandra Park in the north east of Glasgow.
She left school with little formal education but got a job as a laboratory technician in histopathology at Glasgow Royal Infirmary.
Later she moved to London to further her career and in 1954 married Enriques Almeida, a Venezuelan artist.

The couple and their young daughter moved to Toronto in Canada and, according to medical writer George Winter, it was at the Ontario Cancer Institute that Dr Almeida developed her outstanding skills with an electron microscope.
She pioneered a method which better visualised viruses by using antibodies to aggregate them.
Mr Winter told Drivetime on BBC Radio Scotland her talents were recognised in the UK and she was lured back in 1964 to work at St Thomas's Hospital Medical School in London, the same hospital that treated Prime Minister Boris Johnson when he was suffering from the Covid-19 virus.
On her return, she began to collaborate with Dr David Tyrrell, who was running research at the common cold unit in Salisbury in Wiltshire.
Mr Winter says Dr Tyrrell had been studying nasal washings from volunteers and his team had found that they were able to grow quite a few common cold-associated viruses but not all of them.
One sample in particular, which became known as B814, was from the nasal washings of a pupil at a boarding school in Surrey in 1960.
They found that they were able to transmit common cold symptoms to volunteers but they were unable to grow it in routine cell culture.
However, volunteer studies demonstrated its growth in organ cultures and Dr Tyrrell wondered if it could be seen by an electron microscope.
They sent samples to June Almeida who saw the virus particles in the specimens, which she described as like influenza viruses but not exactly the same.
She identified what became known as the first human coronavirus. 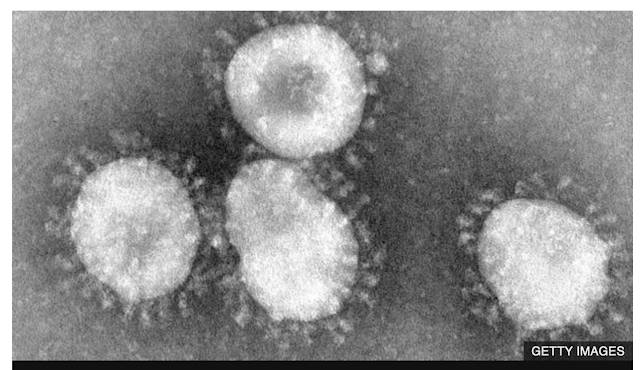 Mr Winter says that Dr Almeida had actually seen particles like this before while investigating mouse hepatitis and infectious bronchitis of chickens.
However, he says her paper to a peer-reviewed journal was rejected "because the referees said the images she produced were just bad pictures of influenza virus particles".
The new discovery from strain B814 was written up in the British Medical Journal in 1965 and the first photographs of what she had seen were published in the Journal of General Virology two years later.
According to Mr Winter, it was Dr Tyrrell and Dr Almeida, along with Prof Tony Waterson, the man in charge at St Thomas's, who named it coronavirus because of the crown or halo surrounding it on the viral image.
Dr Almeida later worked at the Postgraduate Medical School in London, where she was awarded a doctorate.
She finished her career at the Wellcome Institute, where she was named on several patents in the field of imaging viruses.
After leaving Wellcome, Dr Almeida become a yoga teacher but went back into virology in an advisory role in the late 1980s when she helped take novel pictures of the HIV virus.
June Almeida died in 2007, at the age of 77.
Now 13 years after her death she is finally getting recognition she deserves as a pioneer whose work speeded up understanding of the virus that is currently spreading throughout the world.