I'd not planned on posting an article today about the emission of light by living organisms. This is a reprint from Orion Magazine.

When I read the LIVING LIGHT article early this morning shared by DailyGood.org, I couldn't help but smile in my head and heart when I got to the end, especially the last paragraph.  I read that part of the article several times.  I wanted to be in the water with this biologist, illuminating the ocean with my body as he so wonderfully describes.

Oh my, where are those Wayag Islands ? I was definitely with him in the water, on the beach, imagining all that he shared and described in the article. So I started searching. I imagined the night skies in a place this remote to be equally as enchanting, every star illuminated, the undulating sky becoming its own marvel. And the fresh air, so pure, every breath would be noticed.

The Wayag Islands are indeed far and isolated, see the red dot below. They are in between the Philippines, Indonesia, Australia and Papua New Guinea.  And yes if you are intrepid enough you can travel there. I quickly Googled and found websites of resorts, mainly focused on diving, tripadvisor even had reviews on a particular island that people visit to hike a steep and rocky peak.

If you have time and have any interest, spend a few minutes researching these islands, the pictures are amazing. The water beautiful, the islands pure, pristine, the skies, magnificent and blue with passion.

So many places in the world where life happens - I enjoy being surprised by articles like LIVING LIGHT.  Bravo to Mr. Scott for sharing this wonderful experience and science.  My hope is that you share in his delight if only for a few minutes. 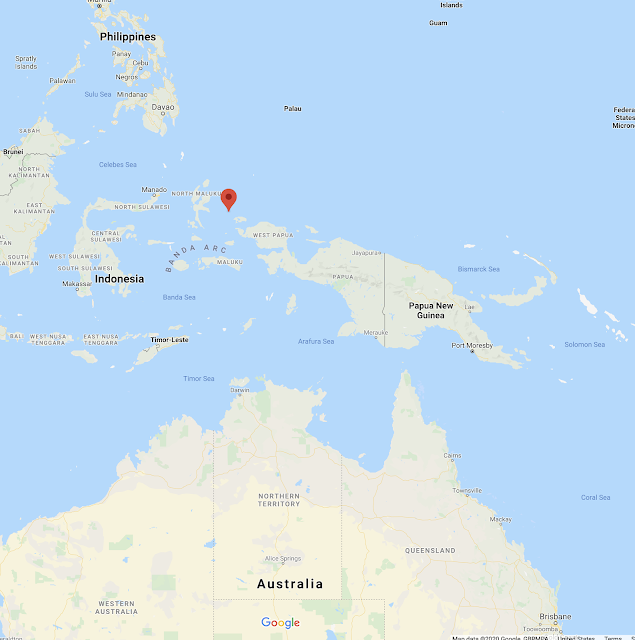 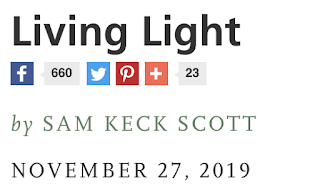 We had sailed Indonesia’s shattered archipelago before arriving at the uninhabited island chain of Wayag — a gumdrop cluster of limestone peaks cloaked in an aura of brilliant, turquoise lagoons. Our crew, a ragbag of scientists and sailors, had come to this remote corner of the globe to study coral reefs. Unlike the bony, barren graveyards that haunt much of the tropical world, the reefs in this part of Indonesia are still vibrant, prismatic wonderlands, and if kept intact, can serve as nurseries to repopulate our oceans. These Technicolored coral wildernesses are unforgettable, yet what I saw at night during that voyage glistens most brightly in my memory.

One evening we had a cookout on a small beach, and in the wee hours of the morning I peeled myself off the sand to head back to the boat and my bunk. I pushed off into the black water, the fins of my paddleboard scraping the ground before gliding out into the bay. I didn’t have a flashlight, nor did I need one; the entire Milky Way had touched down to fill the secluded inlet with thick, woven starlight. Sixty feet up the mizzenmast, our ship’s anchor light shone, a little beacon moon to aim toward as I crossed the half mile of water. Snaking off each side of the pointed tip of my board were pearl necklaces of light, twisting in tiny jet streams past me. With each paddle stroke, the once-dark water pulsed a lucent bluish-white, first in a stout wall, then breaking into windswept clouds of luminous flagella, frenzying for a moment before going black and silent once again. I was rowing straight through the cosmos: the bright, cold braid of stars above and the starlike streamers below. I imagined how the Polynesians had read the night sky like a map of pinpricked light — a map that was not only above them but all around. A map that their wooden boats cut straight through, parting the stars as they went.

Bioluminescence is the emission of light by a living organism. Before going to sea for the first time, I had no idea just how positively awash this world is in light-emitting life. Most of the bioluminescence seen from the deck of a ship comes from profusions of Noctiluca scintillans, microscopic dinoflagellates aptly known as “sea sparkle,” which burst with light each time the water around them is stirred or agitated. Noctiluca scintillans proliferate in warmer waters, so all around the equator our planet is wearing a thick belt of potential light, wakened into nebulae and galaxies by boat hull and paddle stroke, whale and turtle, wave against sand and rock, creeping octopus and patrolling hammerhead shark.

Imagine raven-black ocean all around you — nothing to see — but then you stand at the front of the ship where it slices through water, and there, light is spinning and twisting in opaline helixes and clouds off each side of the bow like liquid fairy dust or a cast spell still careening toward its destination from the tip of a wand.

I’ve seen birds take off from the surface of the sea in the dark, startled out of a bobbing sleep by our approaching vessel, and as they beat, beat, beat their wings, they smacked a trail of light in their wake before disappearing into the invisible air. If birds can set off this thrum of light, imagine blue whales and how nobly they must shine as they drive their ninety-foot bodies through the sea at night, glowing from baleen to fluke, their spouts hissing geysers of blue crystals into the night air.

On another night we were anchored off a different small Indonesian island. I was nearly finished cleaning the galley after dinner when I headed up on deck to pitch the slop bucket overboard. When that dripping pile of onion peels, potato skins, and coffee grounds splashed against the still water below, it looked like I had thrown a bucket of Day-Glo paint instead of compost overboard. By then I had seen bioluminescence, but this was different — this was concentrate. I took off my shirt, put on my snorkel mask, and jumped off the stern.

My body created an upside-down fountain of white light as I slammed through the surface of the water, instantaneously incandescent. I flailed around wildly, sending limbs and sparks in all directions. My slim, creaturely legs resembled two long, bony-tailed fish glowing in a wet splendor. My crewmates shouted that it looked like I was on fire: a watery self-immolation; a scintillated baptism; a sacred, gleaming doggy-paddle. To swim in light. To become light. If this was the only thing I ever experience before leaving this world forever, it would have been worth it.

When I finally climbed back on deck, I was surprised there was no need to scrape the light from my body. O