If you watch the evening ABC news with David Muir, this story ran 2 days ago, the Falling from trees Iguana Forecast.  CNN ran the story included below, and it really is true.

The first year I moved to Florida we had a few days of very very cold weather and the same forecast made the news. Not something you see everyday.  I didn't really believe it until I read all the science behind why this happens.

When we lived in Panama, iguanas were part of the landscape, especially on our grandparents farm, Linda Vista.  We saw them often, we did not bother them and they did not bother us.

In South Florida they are considered an invasive species; not native to the local ecosystem and causing harm. They can harm the environment, the economy and even human health.

From stories I've read and heard, in south Florida iguanas invade residential areas and eat up all the plants and flowers and come in large groups.  I never saw that in Panama.

Nature and man, always something going on. 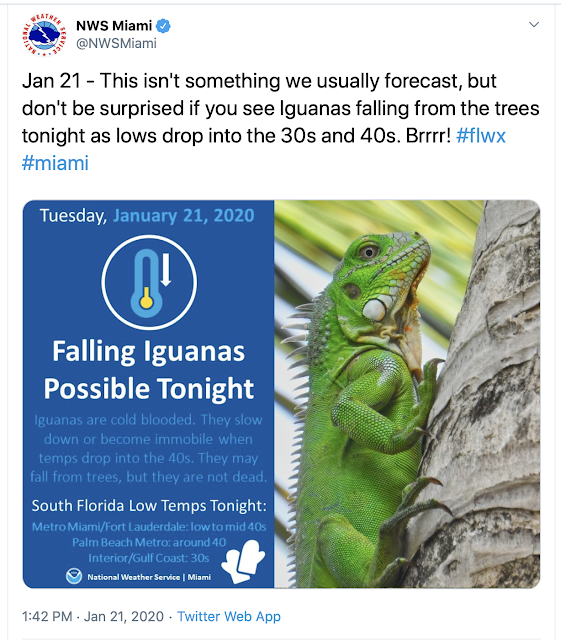 (CNN) As the coldest air of the season spreads across the Eastern US, even some southern states are feeling the chill.
From Louisiana to the Carolinas, even down through Florida, temperatures are averaging 10 to 15 degrees below normal.
Freeze warnings and hard freeze warnings are in effect across Florida and Georgia through Wednesday morning.
Tuesday afternoon, the National Weather Service in Miami issued a rare forecast regarding cold temperatures but it was for iguanas. Yes, you read that correctly.
I - guan - as
"Don't be surprised if you see iguanas falling from the trees tonight," tweeted the Miami National Weather Service office.

The concern for people in South Florida is that these iguanas often sleep in trees, so when their bodies go dormant, they appear to fall from the sky onto streets, cars, pools, or even people walking around. And since iguanas are large -- adult males can reach 5 feet in length, and weigh up to 20 pounds -- this can be dangerous if one lands on top of you.
The invasive species can't handle cold temperatures very well because they are cold-blooded. In general, iguanas begin to get sluggish or lethargic once the temperature drops below 50 degrees Fahrenheit.
Once the temperature drops below 45 degrees Fahrenheit the iguanas go into a dormant or cold-stunned state. They appear to be dead, but they are not. They remain breathing with critical body functions still operating.
It is their body's way of protecting them until the temperature warms back up above 50 degrees.
If those temperatures remain in the 40s for periods over eight hours, a significant number of those iguanas will die, especially the smaller ones.

The temperature threshold for when iguanas begin to go into a dormant state depends greatly on the size of the iguana," explains Ron Magill, communications director for Zoo Miami. "Generally speaking, the larger the iguana, the more cold it can tolerate for longer periods."
He also demonstrates how even though extended periods of air temperatures in the 40s could lead to the demise of some iguanas. Many iguanas in South Florida have adapted to going deep into burrows where they stay insulated from the cold. They tend to also live close to large bodies of water, which tend to be warmer than the air temperatures, which help them survive short cold snaps.
Not everyone is concerned about the well-being of these iguanas, though. They are considered an invasive species, so some people are looking forward to an opportunity to rid their yards of these reptiles.
"I do know that there are several iguana hunters that are looking forward to this upcoming cold front as it will certainly facilitate them removing these invasive reptiles from the South Florida environment as they will not be able to run away!" Magill told CNN.