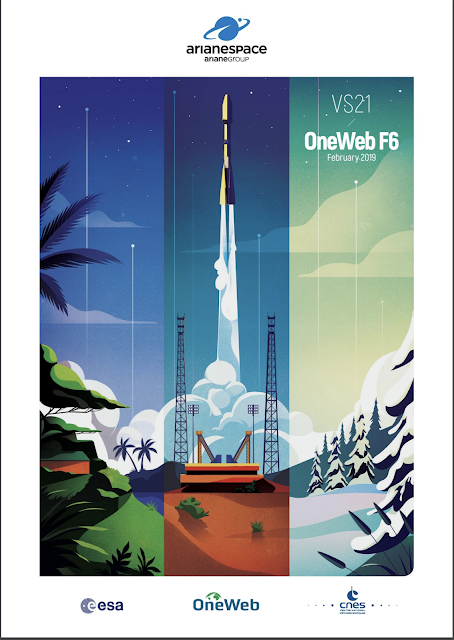 from Techcrunch.com  by  Devin Coldewey


After four years and more than $2 billion in funding, OneWeb  is ready to launch the first six satellites out of a planned constellation of 650 with which it plans to blanket the world in broadband. The Arianespace-operated Soyuz rocket will take off at 1:37 Pacific time from Guiana Space Center. You can watch it live at OneWeb’s site here.


OneWeb is one of several companies that aims to connect the world with a few hundred or thousand satellites, and certainly the most well-funded — SoftBank  is the biggest investor, but Virgin Group, Coca Cola, Bharti Group, Qualcomm, and Airbus have all chipped in.

The company’s plan is to launch a total of 900 (650 at first) satellites to about a 1,100-kilometer low Earth orbit, from which it says it will be able to provide broadband to practically anywhere on Earth — anywhere you can put a base station, anyway. Much cheaper and better than existing satellite connectivity, which is expensive and slow.

Sound familiar? Of course SpaceX’s side project Starlink has similar ambitions, with an even greater number of satellites planned, and Swarm is aiming for a smaller constellation of smaller satellites for low-cost access. And Ubiquitilink just announced this week that its unique technology will remove the need for base stations and beam satellite connections directly to ordinary phones. And they’ve all launched satellites already!

OneWeb has faced numerous delays; the whole constellation was originally planned to be in place by the end of 2019, which is impossible at this point. But delays are the name of the game in ambitious space-based businesses, and OneWeb hasn’t been just procrastinating; it’s been girding itself for mass production, raising funds to set up launch contracts, and improving the satellites themselves. Its updated schedule, as it states in the mission summary: “OneWeb will begin customer demos in 2020 and provide global, 24-hour coverage to customers in 2021.”

At a reported cost of about a million dollars per satellite — twice the projected cost in 2015 — just building and testing the constellation will likely rub up against a billion dollars, and that’s not counting launch costs. But no one ever said it would be cheap. In fact, they probably said it would be unbelievably expensive. That’s why SoftBank and the other investors are “committing to a lot more capital,” as CEO Adrián Steckel told the Financial times last month.

The company also announced its first big deal with a telecom; Talia, which provides connectivity in Africa and the Middle East, signed on to use OneWeb’s services starting in 2021.

Soyuz launches could carry more than 30 of these satellites each, meaning it would take at least 20 to put the whole constellation in orbit. This first launch, however, only has six aboard; the other spots on board the mass launch system have dummy payloads to simulate how it should be going forward.

A OneWeb representative told me that this launch is meant to “verify the satellite design and validate the end to end system,” which is probably a good idea before sending up 600 more. That means OneWeb will be testing and tracking these six birds for the next few months and making sure the connection with ground stations and other aspects of the whole system are functioning properly.

Full payloads will start in the fall, after OneWeb opens its (much-delayed) production facility just outside Kennedy Space Center in Florida.