33 Years Ago Today ~ Looking Up 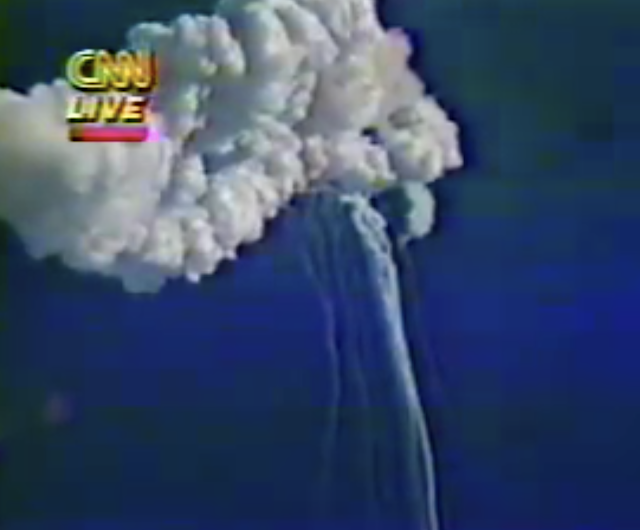 It was early morning, it was a Tuesday. I was in the warehouse staging area of Daniels Cablevision in Carlsbad, California.  I was 27 years old. I was the Call Center Supervisor and I was down in the warehouse checking on a job scheduled for that day.

The installers and techs had already left for their scheduled appointments. It was me and 2 other people in the staging area. I was leaning in, over the counter where the installers and technicians  were issued their equipment and work orders for the current day installs and repair calls.

We were all looking up.  Looking up at the small 12 inch black and white television perched on the 3rd level of a shelf that held multiple plastic bins filled with cable plant an cable installation equipment. We were waiting for the lift off. I was watching, looking up, interested especially because of the teacher, the first civilian in space, Christa McAuliffe, 37.

At 8:39am PST - 11:39am EST the space shuttle Challenger started the slow motion ascent into the beautiful clear blue skies of Florida at Cape Canaveral.  78 seconds into the lift off something happened, smoke plumes, 2 of them where overtaken by a large white cloud with orange and black streaks, it was all so fast, the NASA commentator tracking the distance traveled, the speed, the power of each engine, he stopped talking, the screen was silent.

Up to that point the information provided was technical and affirming, the mission was progressing as planned and then silence, on the screen we saw what looked like an explosion, and then silence, silence, silence. The commentator said something like "we are looking at the situation carefully, there appears to have been an explosion".  And then the coverage of the disaster began to unfold. The immediate thought of all watching, OH MY GOD.

As I returned upstairs to the office and call center section of the Daniels building, everything and everyone was quiet. The call center phones stopped ringing, all the flashing lights on the CSR phones and the main switchboard had gone dark. Everyone was standing around the small television sets throughout the call center, everyone looking up. It was quiet, everyone trying to figure out what had happened, how and what happened to the astronauts ?

For hours the phones were quiet.  Everyone in their homes looking, watching, wondering, weary, sad, it was an explosion of disbelief, of tragedy, of country, and everyone watching had a front row and center view of those tragic moments.

So much was learned from that horrific event. There are many articles, books, white papers, documenting all that went wrong and all that was improved and changed over the years to accomplish future shuttle missions.

There was a 2nd shuttle tragedy when the Columbia disintegrated upon reentry killing all seven of the crew, on February 1st 2003.  The space shuttle program ended officially in 2011.