From: The Botany of Desire by Michael Pollan

As of late I can't eat fresh pineapple or fresh oranges. Not sure how or why, in April I developed a severe rash on the side of my mouth, (in the chin area) and I could not figure out why ?  After a few repeat incidents, I figured out that anytime I had pineapple or oranges the rash would appear in 4 to 6 hours.

Since then I've been sampling all the different apples available at the local grocery store. I was not a fan of apples before, now I'm starting to appreciate the different types, their colors, flavors and even how some are much sturdier and last longer in the refrigerator than others.

Maddie likes all of them especially if I add a tiny bit of peanut butter.

I also recently read a book, THE BOTANY OF DESIRE and I learned more about apples that I've ever imagined.  So below is an excerpt. Enjoy ! 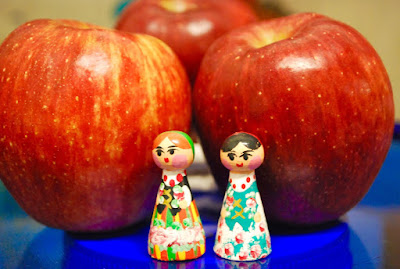 Slice an apple through at its equator, and you will find five small chambers arrayed in a perfectly symmetrical sunburst --- a pentagram.

Each of the chambers holds a seed (occasionally two) of such a deep lustrous brown, they might have been oiled and polished by a woodworker.  Two facts about these seeds are worth nothing.

#1 First, they contain a small quantity of cyanide, probably a defense the apple evolved to discourage animals from biting into them; they’re almost indescribably bitter.

#2 The second, more important fact about those seeds concerns their genetic contents, which are likewise full of surprises. Every seed in that apple, not to mention every seed riding down the Ohio alongside John Chapman, contains the genetic instructions for a completely new and different apple tree, one that, if planted, would bear only the most glancing resemblance to its parents.

If not for grafting, the ancient technique of cloning trees, every apple in the world would be its own distinct variety, and it would be impossible to keep a good one going beyond the life span of that particular tree. In the case of the apple, the fruit always falls far from the tree.

The botanical term for this variability is “heterozygosity” and while there are many species that share it (our own included) in the apple the tendency is extreme. More than any other single trait, it is the apple’s genetic variability – its ineluctable wildness – that accounts for its ability to make itself at home in places as different from one another as New England, New Zealand, Kazakhstan and California. 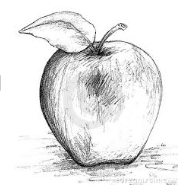 Next time you are anywhere near Geneva, New York, (about 250 miles outside of New York City), the USDA Agricultural Research Service where they have the largest apple tree collection in the world.

What makes this government apple collection the most unique? It’s a hub for genetic preservation, not a commercial orchard or proprietary plant-breeding farm. It’s focused on keeping alive all the different species within the Malus genus and hundreds of cultivars within the grocery store-ready Malus domestica species. Even the most diverse apple orchards working to preserve heirloom apples or those working to breed new types of apples are most often working with Malus domestica (domesticated apple) alone. Commercial orchards are working with cultivars or varieties. ARS Geneva has 53 species.
A vastly underfunded and understaffed program, ARS Geneva only has a handful of researchers. For example, there’s only one researcher in the whole country dedicated to developing new apple rootstocks! However, C. Thomas Chao, the collection’s Horticulturist and Curator, was kind enough to stand outside in the cold with me for nearly an hour answering my questions.
After that, he allowed me free reign to stay in the orchard and taste any fruit I wanted until the gates were closed! [Envision me, a proverbial kid in a candy store, hiding my glee at this news.] They’re not interested in or able to compete with commercial growers or get involved in Intellectual Property disputes around breeding the newest and best apple cultivar, so there was no secrecy involved. In fact, nearly all of the collection’s material can be requested and received in the form of grafting material from the ARS Apple Collection Catalog for free! They want people to know about and use this material.
Thomas explained there are nearly 8,000 accessions (items) in the collection, about 1,500 of them grown from wild seed around the world and the rest from plant tissue grafted on dwarfing or semi-dwarfing Malus rootstock. 2,000 varieties are present. Thomas said, “We’re the only ones in the country focused on the wild stuff,” probably because “nothing wild will ever be turned into a commercial variety.” The crops are sprayed according to Cornell Cooperative Extension recommendations, but of course, sometimes, trees die. Fortunately, there is a liquid nitrogen cryo-backup system in Fort Collins, Colorado for almost every specimen in the Permanent Collection to ensure things aren’t lost. A friend of mine, Christopher Richards, has a lot to do with the research and maintenance of that collection. He was in the mountains in China doing wild apple research just this past week. I have a really awesome job, but if I didn’t, I’d surely be working to get the proper education to work alongside Chris or Thomas!
Apples most people are familiar with are clones of mother trees found or bred for tasty fruit and grafted onto rootstock with preferable growing qualities (see our earlier blog post about grafting for more explanation). Just as inbreeding with animal species or senescence in gourmet mushroom farming, the reliance on a limited number of monocropped cultivars of apples can ultimately result in weaker specimens, more pest and disease problems, and less tasty and nutrient-rich food. If Malus domestica cultivars begin to fail, rootstocks are attacked by new or stronger pests, or climate change continues to threaten currently-accepted growing conditions, the ARS Geneva genetic databank will allow farmers and scientists to go back to the drawing board.