Maddie and I are hooked on white noise.  Not sure who relies on it most, Maddie or myself.  It all started when we moved to Jacksonville.

Maddie, like me, is extremely sensitive to sound. As a puppy she barked at any and all sounds until she got used to them and knew they were OK. When Brian, the next door neighbor in Atlanta, used to come home at 2am on his super duper motorcycle, Maddie, as a puppy would stand at attention at the edge of the bed and bark in the mode of I know there is a big noise out there and I'm going to protect everyone.

Maddie took her "guarding" instinct to a level of a BIG DOG. The dog behavior expert I worked with in my early days of Maddie and Morgan, suggested we name the noises so Maddie knew that the sound of the motorcycle or the garage door or the jets flying overhead or the geese at the water filtration plant, and yes even the sound of the doorbell, she learned that all these sounds are part of her world and that they are OK.  The goal, to get to a place where Maddie did not get adrenalized and go into full protection mode when reacting to everyday expected sounds. Two specific noises she is extremely impacted by, fireworks during New Years and Florida thunder storms, her reaction to those sounds is shaking and being glued to the side of my body. She now has a "thunder vest" and it's amazing, it works.

It's interesting that for Morgan, you can detonate a bomb next to her and she won't bark.  Morgan barks at other dogs, especially if she sees them on the television screen, and if Maddie barks at someone knocking on the door, Morgan will usually join in.  Other than that, Morgan usually is very very relaxed, she is definitely not "on guard" as Maddie is.

When we moved to Jacksonville and finally settled into the condo at Mirabella, while it is very quiet where we live, Maddie was barking at all the new sounds. She especially did not like when the ice cubes would drop in the ice tray in the freezer. This particular sound set her off day and night. I finally had to turn the ice maker off. Since I live on the ground floor, sometimes Maddie would hear the neighbor upstairs move around and she would bark bark bark, if cars came and went in the community she would bark bark bark.  So to help Maddie with the new sounds I got her a white noise device.

The white noise devices come in all shapes and sizes and vary in cost. I knew I had to get something that worked well.  I did all the research you can imagine, reading countless reviews on Amazon.  And as far as reviews go, these specific reviews were like mini-novels, people commenting on what got them to a place where they had to get a white noise device, where they lived, who was making the noise, how often, how upset they were, the reviews were very entertaining.  Finally we settled on a LectroFan device and yes it really does work. We used white noise device for the first few months we lived here, the goal to keep Maddie sleeping through the night. 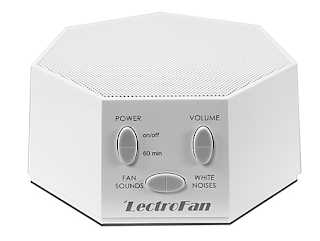 Somewhere in the first few months I discovered that a small fan I sometimes use, makes a sound similar to one of the selections on the LectroFan device, so now we use either the fan or the white noise device. And yes Maddie and I are hooked on the white noise. I've tried to sleep without the white noise and I can't, the silence gets very loud.  It's hard to explain to someone who does not have exaggerated hearing capabilities, like Maddie and I both have. Certainly it's quirky, but it works ! Nite Nite ! 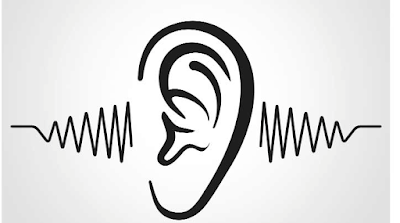 WHITE NOISE - HOW DOES IT WORK

White noise sounds like a hiss, like the spray from an aerosol can. Although all the audible frequencies are equally represented, it sounds higher-pitched to our ears, in part because our perception of pitch is not linear, and also because our ears are more sensitive to higher frequencies.

In applications where we use white noise machines or recordings to help us sleep or concentrate, we say that it "masks" or "drowns out" other sounds. How does that work?

One of the things that makes noise annoying is that the mind notices changes in the backdrop of sound in the environment. No doubt this ability helped keep our ancestors alive, by alerting them to the faint sound made by a stealthy predator. To us, however, becoming alert to every tiny noise can be a problem, when it keeps us awake or keeps us from being able to concentrate.

White noise changes that background sound: the overall level of sound in the environment is higher, which raises the volume threshold over which noises must pass in order to be noticed. Also, the sound quality is featureless, so there are no details for the mind to latch onto and be alerted by. That is why it has a soothing quality — it allows the mind to relax.