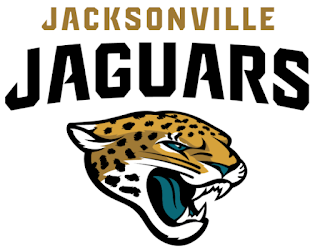 After a horrible season last year, the Jacksonville Jaguars surprised many, perhaps even themselves, by making it to the first round of the NFL Playoffs.

Their AFC South season record gives them home field advantage in the wild card games this coming weekend.  The Jacksonville Jaguars will host the Buffalo, Bills from New York.

Everyone who loves football in Jacksonville is rooting for the home team. Most everyone in the city supports and follows the local football team; 82,000 +  fans will be at the Ever Bank Stadium on Sunday for the game. I will be watching from the comfort of my couch, no jacket required. And Maddie and Morgan can attend.

It would be exciting if they beat the Bills.  The last time the Jags were in playoff game against the Bills was in 1996 and the Jags won.  If the Jaguars indeed win then the next opponent would be the mighty Pittsburg Steelers on their home field.

By Sunday the weather is expected to be much more seasonal, the high should be in the upper 50's or low 60's. Kick off is at 1pm. 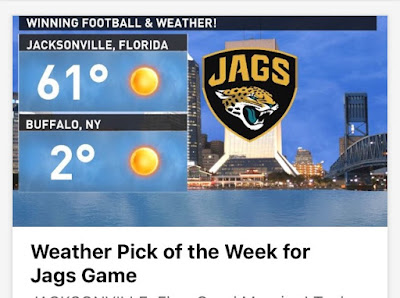 And a bit of trivia, how the Jaguars go their name:

The Jaguars name was selected through a fan contest in 1991, 2 years before the city was officially awarded an expansion team and 4 years before the team would begin play. Other names considered included the Sharks and Stingrays. While Jaguars aren’t native to Jacksonville, the oldest living jaguar in North America was housed in the Jacksonville Zoo.