I read this article yesterday and knew I had to capture and posts as a reprint on VIP.

The book When Breath Becomes Air is a wonderful, touching, insightful, sad, emotional account of the author's, Paul Kalanithi's life as he is dying.  I found out in the article yesterday, there is a like book, The Bright Hour, whose author,  Nina Riggs, also writing about her life as she is dying. I've not read the books by Riggs, I will add to my reading list for sure.

The article below is about the books and how the widowed spouses lives came together. An amazing story. 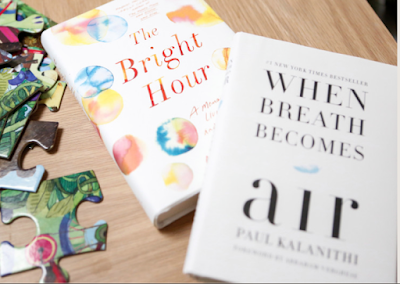 WHEN LOVE BLOOMS FROM GRIEF - REPRINT