Morgan and the Ceramic Bowl 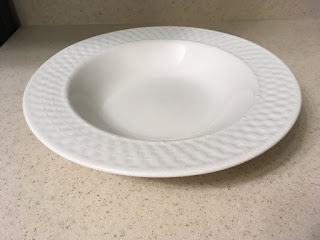 I'm sure that the German physicist, Wilhelm Conrad Rontgen was not thinking of Morgan Sofia, (Welsh Corgi) when he discovered X-radiation in 1895.

Actually historians  say that while experimenting with electrical currents through glass cathode-ray tubes, Röntgen discovered that a piece of barium platinocyanide glowed even though the tube was encased in thick black cardboard and was across the room. He theorized that some kind of radiation must be traveling in the space. Röntgen didn't fully understand his discovery so he dubbed it X-radiation for its unexplained nature.

X-radiation, what we know today as X-Rays. Whatever Mr. Roentgen was working on I'm glad he discovered this marvel. 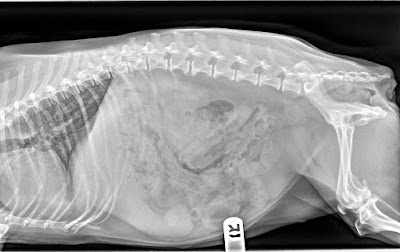 Yesterday, (this is year 13 that I've had 2 dogs, and this has never ever happened before), I was putting a ceramic bowl in the microwave to heat up  leftovers for dinner, around 6:00pm. And YES in the process of moving the bowl from the counter to the microwave it ended up shattered on the kitchen floor, food an all.

Maddie and Morgan were right there, and Morgan being the extreme food interested canine that she is started eating (vacuuming) food off the floor and a piece of the broken bowl got in her mouth. In an instant I saw blood in her mouth as she got very agitated.  This all happened in seconds, seconds.  If you count to 5, it all happened in that amount of time. Yet it was all in slow surreal motion, it was awful for all the reasons you can imagine.

I panicked just a bit, while I was getting Maddie and Morgan out of the kitchen, basically picking them up and putting them in their kennels, while trying to figure out how bad Morgan was cut, her mouth, her gums, AHHHH AHHHHH !

Once in their kennels Morgan settled down and I quickly checked Maddie, she did not have any signs of any blood. She actually had the Why are you so excited Mommie look on her face, asking with her eyes, What is going on ?

I immediately called Ana and Parker and asked if they could come over so I could hold Morgan in the car when going to the ER, it also happen to be raining very heavily. They were home and were ready.  I then called the Animal ER which happens to be about 2 miles from were we live, I explained everything that happened, they answered all my immediate questions and were ready to see Morgan.

In the moments after this happened I was feeling HORRIBLE and SCARED all at the same time. As much care and caution as I take everyday in the lives of both Maddie and Morgan, a simple in home "breaking a bowl incident", had me conjuring up glass tearing up and cutting Morgan's insides, my mind raced and raced.  Ana and Parker were soon here and away we went to the ER.

Morgan had just taken 100 mg of Gabapentin for her front limb issue that we've been treating since June, I knew this calmed her.  She actually sleeps after she gets her pills in the morning and the evening. I knew this would help while we were in the waiting area, when she would probably be with other dogs
making visits to the ER.  And indeed she was calm and no more blood in her mouth while we were waiting to be seen by the vet. 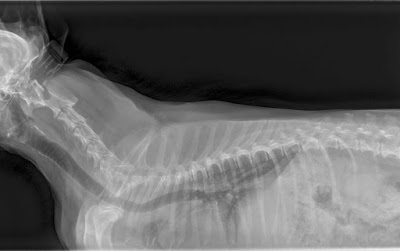 Dr. Timberlake, along with the vet tech, checked Morgan's vitals, they checked her mouth, (no signs of ongoing bleeding or a cut) and then they did 3 X-rays and nothing like what I described, "slivers of thick white ceramic" showed up in the pictures. Or at least no visible signs of foreign objects.

We surmised that 1- she could have swallowed some portion of shards of the ceramic bowl, especially when chewing excitedly as she was,-or 2 - she could have spit it out, I did find 1 or 2 pieces of the shattered bowl with blood.  The vet said all the things I expected: I needed to feed her something soft, wet dog food or mashed potatoes, and in small portions, every 3-4 hours. And I needed to check her poop for blood and/or any pieces or shards of the bowl.

The vet also told me, trying to make me feel better, that she had a labrador in her past that had destroyed and consumed an entire ceramic mug and nothing bad happened to her dog.

Ana and Parker brought us back home around 9pm, Morgan was taking it all in stride. She had mashed potatoes when she got home and drank lots of water. And went right to sleep, sound, I could tell she was worn out.

Today we've continued the mashed potatoes protocol, Morgan and Maddie both love mashed potatoes.  They think were on some special canine holiday.  I'm on full Morgan observation mode, her mood, her level of activity and yes her poops. So far no blood and no pieces of ceramic have passed.  The vet said that after 24 - 36 hours if nothing happened, Morgan should be OK.

The other dogs in the ER last night, two were smaller dogs than Morgan, both had been attacked in their own homes by dogs that were rescues that both families were fostering. One dog had a broken back leg, he was a 8 month old Daschund puppy. And a beautiful black labrador named Roxi, she came in with significant stomach issues, she was triaged to care right away. All the parents in the waiting room, we all exchanged stories and good wishes.

So far today Morgan is doing well. She has slept most of the morning, which is her usual activity after she has breakfast and goes for her short morning walk. Once she takes the Gabapentin, she usually sleeps.

I love Maddie and Morgan so much ! I promised both girls that I'm going to be extra extra extra careful with any dishes on the countertop. 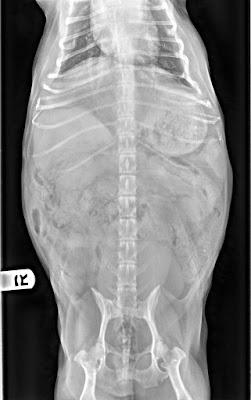