Jacksonville Youth to Sing in Rome

One of the things I like most about living in a new city and new area is all the discovery.

And the discovery is about so many things: people, places, culture, geography, food, shopping, landscape, the ocean, the river, history, music, parks, government, local myths, local celebrities, sports...... the list goes on and on.

I found out yesterday via one of the weekly papers that the Jacksonville Children's Chorus will sing at the Papal Mass in Rome at Saint Peter's Basilica at 10am on January 1st, 2018.  Rome ! with the Pope at the Basilica ! WOW

And even more impressive this is their 2nd invitation. They were there in Rome in 2014 and in many other places around the world. See the about section below.

Below is the update from the Jacksonville Chamber


This upcoming holiday season, the Jacksonville Children's Chorus' Touring Choir will be traveling to Rome, Italy on a performance tour highlighted by their participation at the Papal Mass celebrating the Holy Day, Solemnity of Mary, Mother of God on Monday, January 1, 2018 at 10 am in St. Peter's Basilica in the Vatican.

Under the direction of President and Artistic Director Darren Dailey, the Touring Choir will take part in the 3rd Annual Youth and Young Adult Choir Festival in Rome and the Vatican. They will perform several times during the festival as well as in local churches during this tour.

Mr. Dailey notes that the "cultural significance of this tour for Northeast Florida is quite high. The JCC has been invited to participate, which is an incredible honor. As we prepare to export our artistic excellence in music to one of the world's most important choral hubs, we are grateful to our local community –without your help, none of this would be possible. Thank you so very much for providing the support that allows Northeast Florida's young musicians to soar."

Below is the letter from Rome, confirming the invitation. 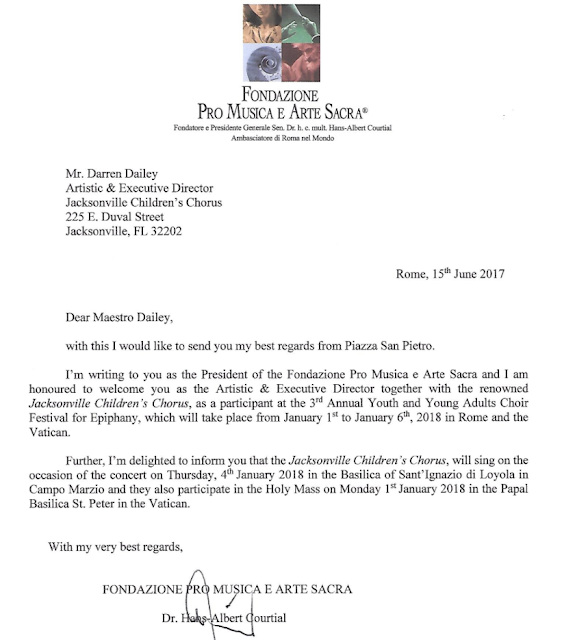 About the Jacksonville's Children's Chorus

The Jacksonville Children's Chorus has become one of America's best youth choruses, performing at Carnegie Hall and Lincoln Center, and has hosted and performed with Amy Grant, Kristin Chenoweth, Audra McDonald, the Westminster Choir, the St. Olaf Choir, the African Children's Choir, Grammy-winner David Holt, and various university and church choirs. The Touring Choir sang Mass at St. Peter's Basilica in Rome in 2014, visited Portland, Maine and Canadian cities including Nova Scotia in 2015, and in 2016 performed in Russia, Estonia, Sweden, Finland and Germany. In 2017, the JCC toured and performed in Croatia, Slovenia, Malta, and Greece.


WHAT A WONDERFUL WORLD - CLICK LINK TO LISTEN TO JCC

If you happen to be watching the Jax Children's Chorus will sign the National Anthem at the Jacksonville Jaguars game at Everbank Field on December 17th, 2017. 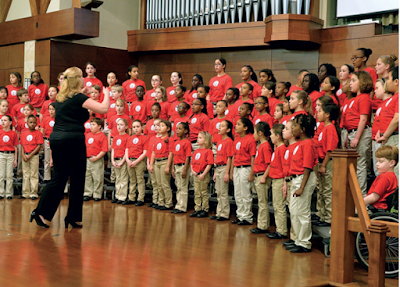