From Vox..... On August 21, a total solar eclipse will cut through the entire continental United States. It’s going to be awesome. If you’re in the bull’s eye center of the moon’s shadow, known as the totality, the sky will go dark for a few minutes in the middle of the day.
The temperature will drop, stars will appear, and birds will become confused and start chirping their nighttime songs. And it’s all because of a cosmic coincidence: From the Earth, both the moon and sun will appear to be roughly the same size.
At just 70 miles wide, the path of the totality is narrow. For the rest of the US beyond this slim band, anywhere from 20 to 99 percent of the sun will be covered by the moon. But everyone in every state (even Hawaii and Alaska!) who’s awake and outside will get to experience it.
From Vox: For everything you need to know about the eclipse, click on this link. 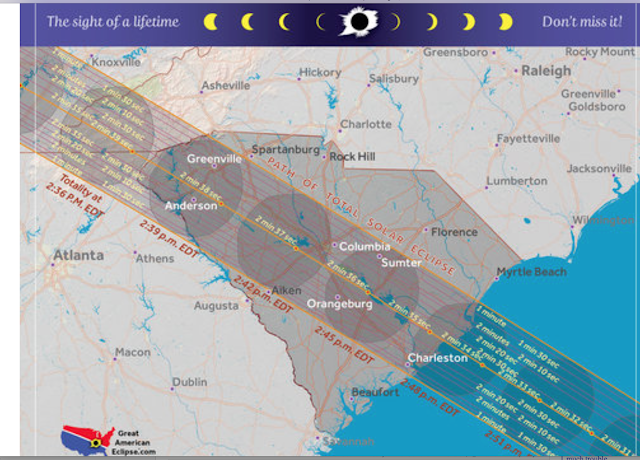 For the solar eclipse on 8/21/2017 I will be staying outside of Atlanta, in Greensboro, Georgia close to the path of "totality", the total solar eclipse.

Still considering if I will drive 2 hours to see the TOTAL versus the partial eclipse. I've read many articles warning that all areas of the ECLIPSE TOTALITY will be jammed, roads, parking lots, parks, stadiums, outdoor venues, anywhere that the total eclipse can be viewed, plan ahead is the call, the warning, the message.

The coverage and hype of this event will exponentially increase over the next two weeks. I have my solar eclipse glasses and for now that is as ready as I will be.

For me everything about the eclipse is fascinating.  That it happens, that science and math can predict the path, the time, the grade of totality.  I wonder and imagine historically how this amazing manifestation of nature was explained, rationed, understood. With little access to information, the day going dark must of been mysterious, frightening, confusing.

I read somewhere, I can't remember the source, the more photos will be taken this day than all the photographs taken in 2017.  I have dear friends, Jim and Gail Keenan, who will be staying in a strategic location in WYO, in the path of totality and they will photograph the event. They are both amazing, National Geographic level in skill, experience and quality photographers, I'm excited to see the photos they will share.

A few years ago I was in Ghana when that country was in the path of a partial solar eclipse and there were two running explanations in Kissemah village, the science explanation and tribal explanation.

Some of the children came to school sharing their understanding of what had been explained to them at home and what they shared had nothing to do with science. It was doomsday, unkind gods putting the world on notice.

I remember vividly the children being afraid, not all of them, some. Most of the children in the Kissemah compound were excited and curious. We had one pair of eclipse glasses to share and we passed them around with fury.