After much consideration and discussion with Morgan's doctor in Atlanta, Cindy and I decided to go ahead and get Morgan tested for the presence of the recessive DM mutation; specifically a DNA test to find out if she affected by canine degenerative myelopathy.

For about 18 months Morgan has exhibited shaking and trembling in her back legs, it started on one side, now it is both of her back legs, the trembling has progressed to a much more pronounced and visible almost tremors of the backside.

The condition is not painful, certainly it has slowed her down.  Maddie who is 9 months younger than Morgan, has exhibited absolutely no signs of the trembling or shaking. Both girls will be 13 years old next year.  Morgan in January and Maddie in September.

The reason for the test: if Morgan does not have two copies of the mutant gene, (inherited from her parents), then the trembling and shaking is being caused by something else and if this is the case, we can try to figure out why.

The kit arrived in the mail yesterday. Parker and Ana will come over on Friday to help me. The test kit goes to the University of Missouri, College of Veterinary Medicine, Genetics Lab. Results are shared within 2 weeks. I will provide update. 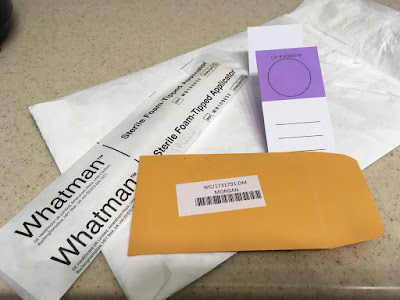 Canine degenerative myelopathy, also known as chronic degenerative radiculomyelopathy, is an incurable, progressive disease of the canine spinal cord that is similar in many ways to amyotrophic lateral sclerosis (ALS).

Onset is typically after the age of 7 years and it is seen most frequently in the German shepherd dog, Pembroke Welsh corgi, and boxer dog, though the disorder is strongly associated with a gene mutation in SOD1 that has been found in 43 breeds as of 2008, including the wire fox terrier, Chesapeake Bay retriever, Rhodesian ridgeback, and Cardigan Welsh corgi.[1][2]

Progressive weakness and incoordination of the rear limbs are often the first signs seen in affected dogs, with progression over time to complete paralysis. Myelin is an insulating sheath around neurons in the spinal cord. One proposed cause of degenerative myelopathy is that the immune system attacks this sheath, breaking it down. This results in a loss of communication between nerves in lower body of the animal and the brain.

The onset of Degenerative Myelopathy generally occurs later in life starting at an average age of about 8 years. However, some dogs may begin experiencing symptoms much earlier, some later, and a small percentage of dogs that have inherited two copies of the mutation will not experience symptoms at all. Thus, this disease is not completely penetrant, meaning that while a dog with the mutation is highly likely to develop Degenerative Myelopathy, the disease does not affect every dog that has the genotype. 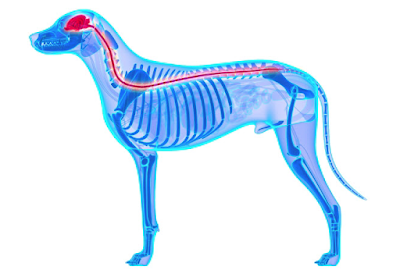