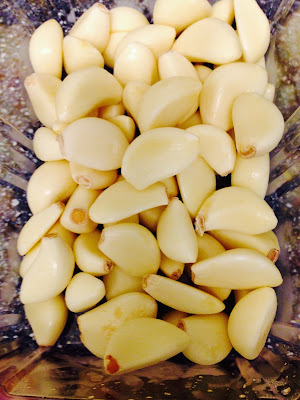 What do garlic and opossums have in common ?

Twice, in the past three weeks, Maddie and Morgan have had a visit from an opossum in the backyard and both times it was a close call.

The opossum is the same size as Maddie and Morgan, probably not as heavy.  Both times when the girls first spotted the opossum, the animal literally froze, playing dead or trying to impersonate a large object. I've seen it happen twice, it's a strange behavior.

Thank goodness the opossum figured out it needed to get away, after 15 or 20 seconds of the frozen pose, it ran the length of the backyard and jumped over the fence, like a cat, agile and quick.

On Thursday I chopped about 2 cups of garlic cloves and proceeded to strategically place the garlic mush on the other side of the backyard fence. I also put some of the garlic at the top of the fence posts at both ends of the fence.   I'm not sure what is different in 16 years, I've only seen the opossum twice and only in the last 3 weeks.  A few people have suggested that maybe the opossum had babies somewhere along the fence line and the MOM is coming to see her babies.  I hope that's not the case.

Tomorrow the forecast is for a sunny day and temperatures in the low 80*s. I plan to add another round of fresh garlic to the fence line. I'm also now checking the backyard before the girls go out.  Most articles say that opossums don't carry rabies, but certainly their bites can injure the girls and also cause infections.  And I certainly don't want to get involved in a fight between the girls and the opossum.

I hope the crushed garlic home remedy works.  Will keep you posted. 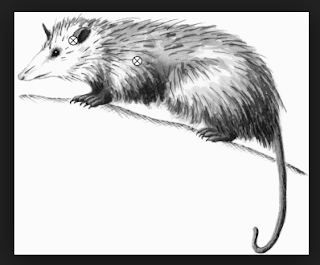 OPOSSUM DETAILS:
Over 70 million years ago dinosaurs roamed the Earth. While they are now extinct, one animal who shared the same land with the dinosaurs still exists today… the opossum.  Despite its appearance, the opossum is not related to the rat. In fact, the opossum is a marsupial, or “pouched” mammal, and is therefore related to other marsupials such as the kangaroo and the koala. Like kangaroos and koalas, infant opossums stay inside the mother’s pouch to nurse and develop. The opossum holds the distinction of being North Americas’s only marsupial.