Tuesday is for Thank You

This story ran in the Desert Distpach last week, the local newspaper in Barstow, CA, where we grew up when we moved to the US.

I was surprised when I got the link to the online version from one of my high school classmates who lives in Barstow.   The story ran the day before the 13 year anniversary of my DAD's death - January 8th, 2003.

I've reached out to Mr. Milton and plan to talk to him later this week.  I am grateful along with my siblings that 36 years later, Mr. Milton remembers.  I've never ever heard of my DAD referred to as a "hero" -  the story emotional on some many levels. 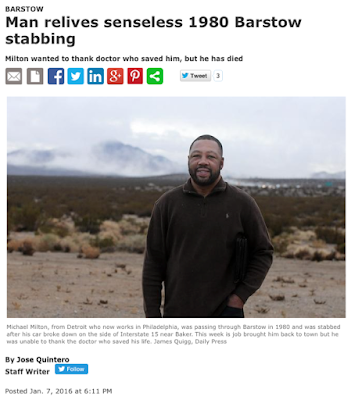 BARSTOW — When Michael Milton was passing through Barstow from San Diego to Detroit in September 1980, he would have never guessed the trip would impact the rest of his life.

Milton was 21 at the time. He had been discharged from the Navy and was heading home to Michigan. But a broken radiator hose stranded him in Baker on the side of Interstate 15 just after midnight. In need of help, he believed assistance had arrived when about four motorcycles pulled over.

With the roadway not lit, all Milton, now 58, saw at the time were silhouettes behind the headlights of the motorcycles.

“ The light was shining bright in my face as I’m walking up to the bikes,” he recalls. “As I walked up I was telling the guys that my car broke down and I need help. I remember there being some of the guys on the bikes with a girl sitting behind them. And I don’t know if one of these guys was trying to prove something to these girls, because he called me the N word.”

Then Milton remembers the man throwing a punch. Milton blocked it, but then was stabbed in the stomach.

“Then I backed up and one of the girls says, ‘What did you do that for?” he said. “Then the guy hopped on his bike and sped off. I ran to my car in hopes to chase them down and run him off the road. I tried to catch up to them but then my engine blew up.”

Stranded in the middle of nowhere, Milton had no choice but to start jogging for help. He said he later came across a parked Volkswagen van and went to ask for help.

Milton remembers the driver being leery at first and simply cracking the window about an inch and asking what the problem was. Milton said he had been stabbed, pulled up his shirt to show the stab wound to the stomach and his clothes drenched in blood.
The two men let him inside the van. They had a CB radio and called for help. The men in the van then drove Milton to a gas station at Rasor Road.
Milton remembers being airlifted to Barstow Community Hospital, where he would later undergo surgery. Milton doesn’t remember much after that, other than waking up with tubes in his body and being in immense pain.

Milton said he is grateful to Dr. Rogelio Arosemena, who retired in 1995 after practicing medicine in Barstow for 25 years, according to previous reports.

When Milton was told his job was sending him to Barstow for a week, he thought he would have the opportunity to find Dr. Arosemena and thank him for saving his life.

But after a bit of research Milton said he was devastated to learn Dr. Arosemena is dead. Friday marks 13 years since Dr. Arosemena’s death. He lost a battle with cancer on Jan. 8, 2003 and died peacefully at his home in Panama, according to previous reports.

“He’s my hero and it somewhat feels like his legacy lives through me because he saved my life,” Milton said. “I’ve accomplished so much since the day I was stabbed.

"When I was asked to come to Barstow, I was like, what? I then had to explain the story to everyone and I really hoped to have the chance to meet Dr. Arosemena again. I really wanted to thank him for saving my life. Without him I wouldn’t have the career I’ve had.”

Milton was unable to return home to Detroit for several months after being stabbed. He had to stay in California to recover. Thanks to Dr. Arosemena, Milton said he was later able to pass a physical to re-enlist to Navy, retire and now work for the US Defense Logistics Agency as a Quality Assurance Specialist. Milton is working at Marine Corps Logistics Base, Barstow for the week and will head back home on Friday.

Milton said to his knowledge, the biker who stabbed him has never been caught. After the stabbing Milton went on to have three children, a son and two daughters, who are now grown adults, and had a new take on life.
But the cherry on top would have been the chance to thank the man who was simply doing his job when he saved a young man in 1980.