THANKS FROM MY HEART


I am establishing a tradition this year focused on the week of Thanksgiving.


As long as I'm able, I will write and share posts during the week of Thanksgiving  about being thankful, appreciative and grateful.


Stories, memories, recollections, perhaps sharing a thanks for the first time.

A reminder to myself, an active revisit of the countless times in my life that people have made a difference, that someone made me laugh, that someone held my hand, that someone shared their love, that someone exemplified courage, leadership, kindness, friendship, compassion, humor, honesty, support.


The recollections...... a celebration of all the good we know in life.

He was our neighbor in Panama, Tio Joe and Tia Isabel Nachio, they lived about 200 steps down the street from us in Altos del Golf in Panama City. They are the parents of Isabelita, Guy and Joey Nachio, neighbors that we grew up with and played with all the time when we lived in Panama.

Uncle Joe was personal friends with Joe DiMaggio, yes the baseball player Joe DiMaggio.  I don't remember the story on how they knew each other and I'm not sure how Uncle Joe ended up in Panama, he was from the US.

Uncle Joe was one of those cool, wonderful parents, always making things interesting and funny for all the kids in the neighborhood. The Nachio's had a huge backyard, football field huge and  every year at the edge of their property  (which bordered a small creek) we had the annual Altos del Golf, Christmas tree bonfire and they were amazing.

All the neighborhood kids collected all the trees after Christmas, 30, 40 trees. Uncle Joe would help us stack them up just right so the fire was magnificent, tall and safe. The night of the bonfire we had hot dogs and hamburgers, all the families from the neighborhood would gather and it was a big deal. We all looked forward to that event for many years.

Uncle Joe had a very cool and awesome car in those days, it was the mid 1960's.  It was a Mercury Cougar, metallic blue and always shiny. The Cougar figured prominently in the day to day recovery of my baby brother, Toby's broken femur.


So the story goes: Tobias was a toddler, not more than 3 years old. He wandered out to the garage area where our parents parked the cars in our house in Panama, and a ping pong table that we had stored n the garage, fell on Toby. The table was folded up, it had the wheels on the bottom and when we played we would unfold and set up in the garage.

A particular morning during the week, Toby went out to the garage area and somehow the table opened up and fell on his body and broke the femur in his right leg.  I was the one that got to Toby first, I don't recall the exact details of what and how this happened, we were all thankful that he was not injured critically. 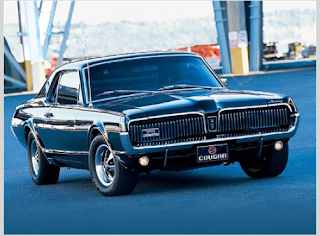 He was taken to San Fernando Hospital and when we came home he had a body cast from the waist down, on both legs. On the broken leg the cast went all the way down to his toes, on the other leg it went down to his knee. The cast was open strategically in the front and back so he could wear diapers and it was sturdy enough that he could stand.  I have a picture, I will find and post.  Whoever put the cast on thought of all the possible scenarios in the recovery of a small child.

Once the care of Tobias settled into a routine, he got to be outside in the mornings. I think we had him in a small bed, and by outside I mean the front of the house in our yard and he was always with someone. Uncle Joe took notice and everyday until Toby was out of the cast, he came by in the morning and flashed the lights of his Cougar. 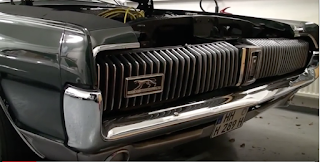 We were all young and we got excited for the daily visit. We would all look forward to the car pulling up in the driveway, especially Toby.  If you click on the link below you can actually see a Cougar wink in action.

Uncle Joe made it a tiny bit easier for Toby during those weeks of his recovery. A tiny gesture that helped Toby and all of us make the best the awful injury.  Once the routine was established, Uncle Joe Nachio never missed a day.

I am sure my parents thanked Uncle Joe many times. With this post I want to thank him again.