Today around 5pm I got home from a quick trip to the store.

Dustin, my neighbor across the street is home.  I see him in his driveway putting something in his car.

He and his wife, Kimberly and daughter, Madison are moving out of the subdivision. Their house was sold in late June.

I said "Hi" from across the street, asked him how the move was going?

He starts walking towards my driveway and comments, "We have 98% moved to the new house."  I can see that he is hot, tired, and carrying something in his hand.

He extends his hand and says, "I came back to get the saint, the saint that helped us sell the house."

Then he proceeds to hand me the St. Joseph statue freshly dug up from his front yard.  He wanted me to have the saint, I reached out my hand and St. Joseph is now in the kitchen window of my house.

Dustin and Kimberly's house sold in about 21 days. Dustin said, "he did a great job for us."  I thanked him for the statue and wished him continued success in the move and told him that we miss them already.  They were wonderful, friendly, fun, neighbors. And their daughter, Madison is beautiful. She is about 15 months old.

St. Joseph was nowhere in any of my mental corridors today,  the visit and exchange and now ownership of Dustin and Kimberly's St. Joseph, a total surprise.  I even commented to Maddie and Morgan that we now have a guest in the house and YES, I washed him off, removed all the dirt. 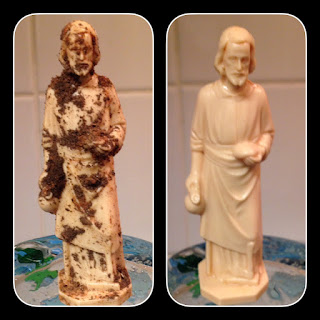 Long ago my friend, Debbie Valdez, shared the practice of getting help from St. Joseph to sell a house.

During the housing bust a few years back, statues were selling fast and furious.  There are countless stories, articles, instructions, about asking for, praying to and getting help from this wonderful saint.

The gesture from Dustin was a pleasant and unexpected surprise. I will hold onto the statue and perhaps one day when I list the house for sale, I will ask St. Joseph for help.


From the Wall Street Journal a few years back:

In Catholicism, St. Joseph, a carpenter, is honored as the husband of Mary and foster father of Jesus. Representing a humble family man, he is the patron saint of home, family and house-hunting, according to the Rev. James Martin, a Jesuit priest and author of "My Life With the Saints." Popular belief holds that people who wish to enlist St. Joseph's help in selling a house should bury his replica upside-down in the yard. (Apartment dwellers are advised to put him in a potted plant.)
Methods of burying the statue vary. Instructions in one package give buyers several options, including burying it upside-down next to the "For Sale" sign, burying it three feet from the rear of the house and burying it next to the front door facing away from the home. Phil Cates, owner of stjosephstatue.com, says: "I've seen it buried in all types of places with all types of ceremonies." He says the detailed burial instructions are largely intended to prevent people from forgetting where they put their St. Joseph. (His kits advise burying it facing it away from the house, to symbolize leaving.)
Theologians say there's no official doctrine that calls for the statue's interment. The practice may have stemmed from medieval rites of land possession, in which conquerors claimed land by planting a cross or banner, says Jaime Lara, associate professor of Christian Art and Architecture at Yale Divinity School. Mr. Lara also suggests that the tradition may have gotten mixed up at some point with folklore surrounding St. Anthony. St. Anthony, known as a matchmaker, would often be held ransom, upside-down, until he found a husband for someone's daughter, he says.