Excerpt from my niece, JoAnn's update she shared via email last week, on her 3D Class Final.  JoAnn is a student at the Pratt Institute in Brooklyn, New York. Her major is Interactive Arts. 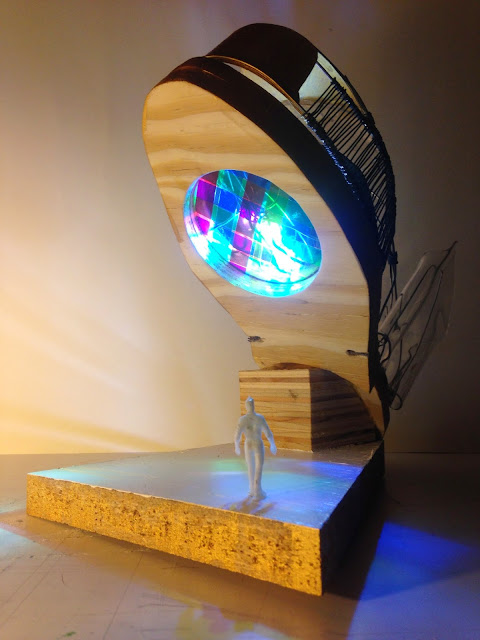 "For this final 3D assignment we had to think about Shoes as Built Environments for your foot and create a sculptural or architectural shoe, according to specifications from a "client" which was a classmate.

Here is the text that accompanied my work and explains it more thoroughly, note the shoe is not meant to be worn, but instead is meant to stand alone as a building or structure, taking into account the preferences of shoes that the client would actually wear.


From the interview I had with my client, Jessica,  I highlighted certain characteristics that she was interested in, which stood out. Characteristics which could best bring this design together.

My client preferred a minimalist and curvilinear design, she also envisioned a shoe that was wearable and comfortable but on the taller side. She saw her shoe in an urban environment, channeling a mix of tradition with fascination.

As inspirational structures she noted the following: Westminster Abbey, Sainte Chappelle and the Gloucester Cathedral.

Once I interviewed my client, I decided to choose my template shoe,  a Creeper Shoe by TUK. These shoes give you height while also being comfortable, they have an overall curvilinear shape and with only four eyelets, also a minimal design. 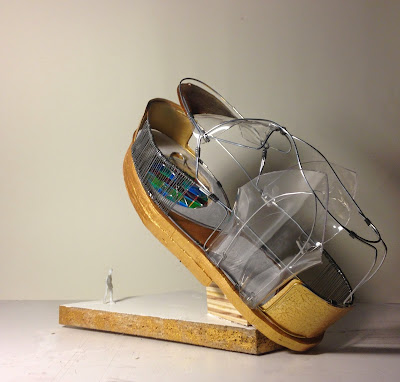 Once I had the base of the structure, I turned to the inspirational images provided by my client, the main theme in common between the three structures she discussed, all Gothic style churches. So immediately I thought of air, space, gold details, colored light and of course pointed arches.

I incorporated all of these details into the shoe design, creating two side arches, a makeshift rose window, and used transparent materials to communicate the fragility and the airy quality of glass.

When Gothic architecture came about, architects managed to re-master arches and vaults, so I tried to convey this within the shoe by leaving a lot of free space within and concentrating the supporting elements of the structure in punctual areas. The mastering of these arches and vaults also gave way for taller and taller structures. I aimed to represent this rising of height of architecture with the angled platform in my structure.

Of course the magnitude of these new structures, also doubled as propaganda for the Catholic church. While celebrating life and civic duty through colored light, the height of these new structures must have been an impact in a time when tall buildings weren’t widespread and even less public ones. The most exhilarating place from where a spectator might view my sculpture would be right underneath the sole, to enjoy the spectacle of colored light but also feeling the sublime height and perceived precariousness of the structure, evoking a feeling akin to what it must have been to witness these cathedrals when they were built. 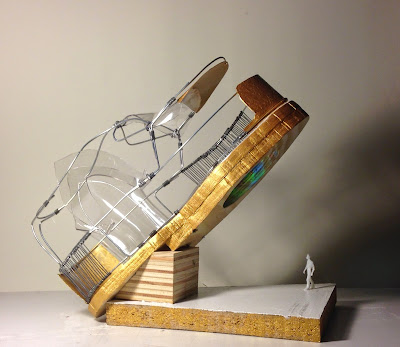