Ah..... Monday morning and the wonderful weekend in Brooklyn is over.  We walked JoAnn back to her dorm about 8:30pm Sunday night and got ready for the trip back home. The time with JoAnn in Brooklyn was awesome !


Sunday we had a very special day !  We started with Grandma JoAnn's awesome French Toast. JoAnn photographed and recorded sound tracks while I was making breakfast, she is making a video/sound project for school and the French Toast is the star. I am looking forward to seeing what JoAnn puts together  ~  I will share.

At 12pm we headed into Manhattan -from the Clinton Hill/Washington station in Brooklyn to the 50th Street station on the C train, via the Blue line.  It was a 25 minute commute, we were headed to Radio City Music Hall.  We had tickets to see the Spring Spectacular Rockettes Show and it was AMAZING ! !  The story line of the show took the audience along on a tour of New York's famed attractions - Central Park, the New York Library, the MET, Fashion Week, all the major sports venues, The Empire State Building and Radio City Music Hall.

The 90 minute production included awesome sets, music, video, and even 3D special effects. At the Central Park stop on the tour, it rained on the stage and all the Rockettes danced in yellow rain coats outfits with shinny yellow boots and umbrellas - and splashed water as they danced, it was very cool.  And the show included Derek Hough from Dancing with the Stars and Laura Benanti.

The audience participated with electronic wrists bands that turned colors depending on what part of the story we were involved in.  And the dancing - it was everything you can imagine the Rockettes can do and more.  Towards the end they did a dance routine to the New York, New York song, where all 40 Rockettes end up in the single chorus line formation and do the famous leg kicks in unison, the energy in the theatre was palpable !  All 6000 people in the audience where delighted ! !    When I visit JoAnn in the future,  I will check the Rockettes schedule, I would definitely come back to see them again.


After the show we took the train back to Brooklyn and had an early dinner at a local Brooklyn restaurant, Aita, in Clinton Hill. It was a small place, seating for 25 or 30 people total. The menu, Italian, all homemade pastas that were delicious.  JoAnn had the Truffle risotto special, I had raviolis in a cheese fondue sauce, and Cindy had pasta made from Kale - all of the entrees were delicately delicious - the kind of dinner where I had to remind  myself to slow down and enjoy each bite.  The restaurant was two blocks from the Brownstone on St. James, all of the customers were walk up's - so most of the patrons all from the neighborhood.  Certainly the way of life, without a car for most, so very different from what I am accustomed to in Atlanta.

Since I am posting this a day late, a tiny update from the Delta adventure, it seems there is always a Delta adventure.  The flight we were on, 1132, La Guardia to Atlanta was full, and when the last person got on, a young girl, probably early 20's, all the seats were taken. 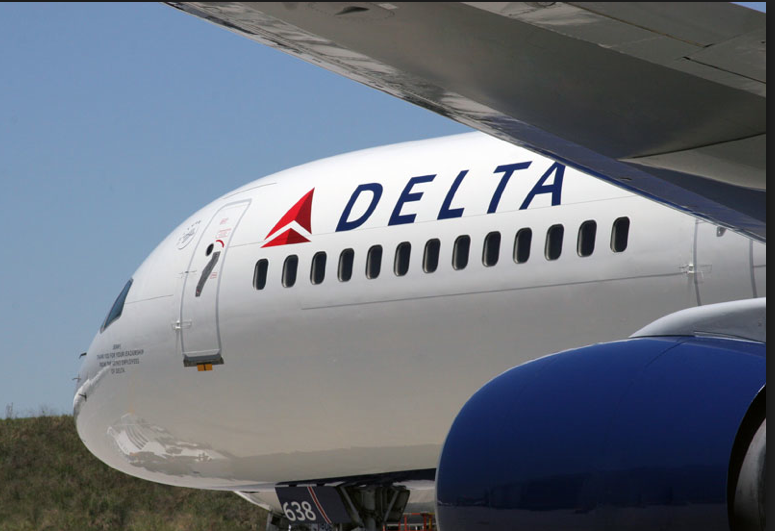 So the adventure began, there was a passenger on board that did not belong on the flight and for whatever reason he or she did not want to identify themselves. The Delta crew on board tried to get the passengers that had been assigned seats from a stand-by list to cooperate and for some reason, the confusion dragged on for 15 or 20 minutes. Finally a RED COAT Delta gate agent came on board, and she was all business.  She looked like Michele Obama, she was tall, had a nice smile, but she was all business. She got on the airplane loudspeaker and convinced the person with ticket 38F to get up from whatever seat they were in and get off the plane. It was an older gentleman, probably mid to late 60's. He was wearing a suit and had carried on a bag, the calmly got off the plane.  And then we were ready to leave.  The entire adventure lasted 50 minutes and then we had to queue on the runway for takeoff which took another 10 or 15 minutes.

We made it to Atlanta, lots of turbulence during the descent, we landed safely.

As we drove home around 2:30pm, a Tornado Alert was broadcast via iPhone.

We were literally 10 miles south of storm that was moving north of the Dunwoody area, closer to
Johns Creek. 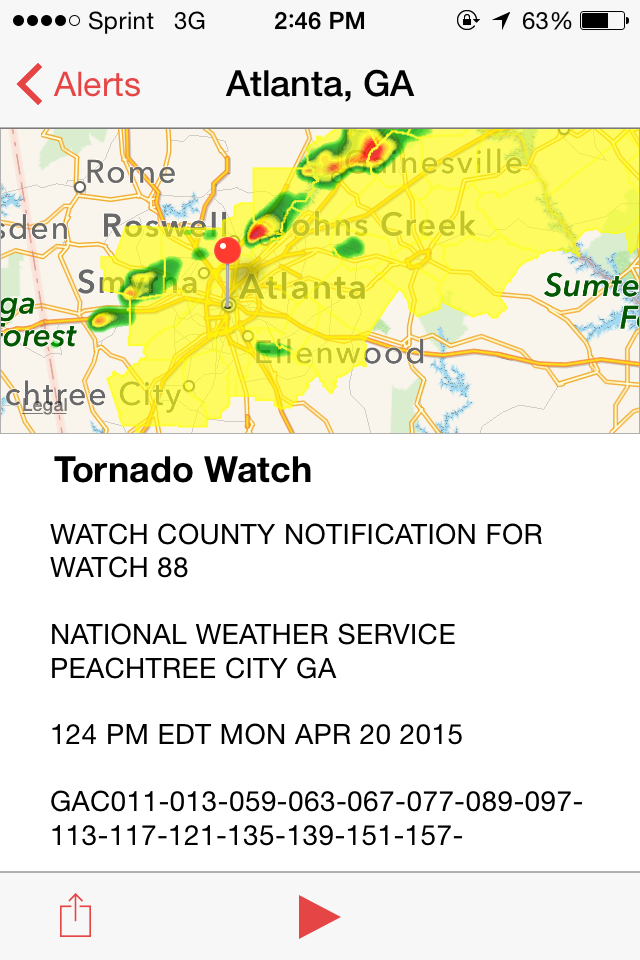 I was so glad we missed the hail and the heavy heavy rain.  Maddie especially was glad to see us,
she does not like bad weather conditions, especially thunder and lightning.