I am currently reading the Walter Isaacson book, Einstein: His Life and Universe.  Reading the book has been interesting, frustrating and at the same time extremely enjoyable.

Frustrating because there is plenty of science in the book and I don't understand everything I'm reading. Enjoyable because Isaacson does an amazing job of writing about Einstein, the person. The details are extremely thorough, as a reader you get to know, Einstein as a child, son, brother, Father, husband, student, employee, friend, professor, celebrity - all of who he was.

His life was indeed amazing, the history he lived, his brilliance, his love of discovery, of thought, of consideration for ideas and theories that did not compliment each other, his persistence for the pursuit of knowledge, all of this coupled with his idiosyncrasies and shortcomings as a human being. The book published in 2007, gives the reader an intimate and very detailed insight into his ALL OF HIS LIFE.

My connections to Einstein: long ago (1976-1977) when I was a senior at John F. Kennedy High School in Barstow, CA, one of my English teachers, Mr. Braden, gave us  a writing assignment, the topic, the Einstein equation below.  It was a creative writing class and we could write anything we wanted on the subject of the equation. I still have the paper I wrote. I will find it one day soon and post.  I've also over the years always liked Einstein's look; I chuckled long ago when I learned he did not like to wear socks, and I love many of his quotes. 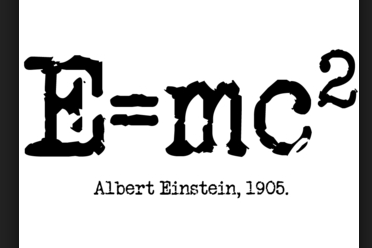 My experience with this 551 page biography is most likely influenced by the fact that last week, right before I started reading the book, I watched the movie, The Theory of Everything based on Steven Hawking's life, and also the movie LUCY, which is about many things, including the capacities of the human brain, Hollywood style.  I've had lots of time this past week learning about and getting to know two amazing men, men who've influenced the world and science with their discoveries, their theories, their teachings, and most of all, their humanity.

FACTS ABOUT EINSTEIN:
By Radu Alexander on November 14, 2014 in Culture, History, and Science
He was the greatest genius of our times whose contributions to physics have been matched only by a handful of others in history. Even so, nowadays Einstein is associated just with one formula: E = mc2. It has been called the most famous formula in the world, and even people who have no idea what mass-energy equivalence is still know it. However, there was a lot more to the man than that.

1. He never failed math. This is a popular “fact” promoted on the internet, maybe in an attempt to relate to genius. However, it is simply not true. Overall, Einstein was an average student, but math was one area where he excelled, unsurprisingly.

2. Einstein encouraged the development of the nuclear bomb. His involvement is often misinterpreted, with some claiming that he helped create the atom bomb. In reality, what he did was write a letter to President FDR encouraging him to begin work on such a weapon, which led to the Manhattan Project. Although a dedicated pacifist and, later, an anti-nuke spokesman, Einstein was convinced that America needed the atomic bomb before the Nazis.

3. He was a great musician. If the whole “genius” thing didn’t work out, Einstein could have become a violinist. His mother played piano so he had the love of music instilled in him—via violin lessons—at the young age of five.

4. He could have been the President of Israel. When Israel’s first president, Chaim Weizmann, died, Einstein was offered the position, but he declined.

6. He won the 1921 Nobel Prize for Physics. This alone isn’t particularly surprising. What is surprising is the fact that he didn’t receive it for the general or special theory of relativity, but rather for the photoelectric effect.

7. He loved to sail. Ever since university, Einstein sailed as a hobby. But by his own admission, he never made a particularly good sailor. In fact, he didn’t even know how to swim.

8. He really didn’t like socks, and usually didn’t wear them. In fact, in a letter to Elsa, he bragged about getting away “without wearing socks” while at Oxford.

9. He had an illegitimate daughter. This wasn’t known until the 1980s, but according to correspondence between Albert and Mileva it was determined that the two had a daughter in 1902 called Lieserl. At one point, all mention of her in letters stopped so her fate is unknown.

10. His brain was stolen. After Einstein died, the pathologist who did his autopsy took his brain without permission. He eventually got the permission necessary from Einstein’s son, but he was fired from Princeton when he refused to turn the brain over. He kept it for over forty years before finally returning it in 1998.