Kurt Arend who is featured in this article is from the 1977 graduating class of John F. Kennedy High School in Barstow, Ca. He is one of my classmates ~   I had no idea he was "Volcano Man" ! ! ! 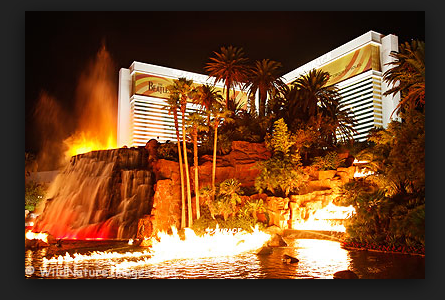 Now in its 26th year of operation, the volcano was out of service for six weeks for a tune-up. The new version has three times as many special effects as the original one, thanks in part to a 135,000-watt stereo system that delivers pounding Polynesian rhythms from Grateful Dead drummer Mickey Hart and renowned Indian percussionist Zakir Hussain through 67 hidden speakers.
It is an enormous task to make sure all of the moving parts fit seamlessly, which is why it takes a six-person team to operate the volcano full time. The I-Team can vouch for this because it became the first television crew allowed to record an entire performance from the top of the Strip attraction.
“We've got natural gas for the flames,” Mirage volcano engineer Kurt Arend said. “We've got lights with colored lenses that look like red amber, like lava. We've got water shooters that shoot water in the air with lights underneath so it looks like lava.”
As one of the most iconic images in Las Vegas, the volcano looks terrific from the sidewalk, where it is watched by most passersby. But it is even more spectacular when viewed from atop the volcano. It is a view few people have seen.
The I-Team wondered aloud whether there was only one guy who ran the operation, which is why the TV crew went on a mission to find the Volcano Man.
Wide-eyed visitors stare in awe at the nightly eruptions of fire and steam, and at the rocky crags glowing with hints of red-hot magma. But high above it all a lone figure stands in the shadows, his face flickering with reflections from the Mirage volcano. His volcano.
The TV crew wondered, is this Vulcan himself or perhaps Pele, preparing to toss in a sacrificial virgin or two? But we're getting way ahead of ourselves. Reverse down the volcano ladders to the bottom.
The story began back in the late 1980s, when the Strip's first megaresort was under construction. Something unique was forming out front, a faux Kilauea, a Vegas Krakatoa. The volcano was a hit from the first eruption.
“It's our out-front feature, our main feature on the property and it's been here since we opened in 1989,” said Mirage facilities operations manager Dennis Mefferd.
Mefferd isn't the Volcano Man. He's the Volcano Man's boss. The world's only volcano control room is his office. To get there the Volcano Man slides into the bowels of the earth, into darkness. He and his team are the only mortals with this kind of power.
Arend: “We're the only ones who have a license to operate a volcano.”
I-Team: “What does it say on the license?”
Arend: “Volcano effects operator.”
For more than 15 years Arend has been in charge of the world's first man-made volcano. That has to be a great conversation starter at parties.
Arend: “Somebody asks what we do. I say, ‘I work at the volcano.' They say, ‘what is there to do but push a button?' There IS a button to push but there's a lot more maintenance to the volcano.”
I-Team: “Is there a button to push?”
Arend: “There is, right here.”
There are actually a lot of buttons to push, sensors to check and monitors to watch. The volcano is an engineering marvel but a lot of elements have to perform in unison for the illusion to work.
Click a button and more than 100 alien submarines rise from the water of the Mirage lagoon. Those are the fire shooters.
To service the gear Arend and his teammates often work in wet suits and are certified divers.
“All the electronics are underwater,” he said. “A can goes over it to keep it dry.”
From inside the volcano, which is just below 40 feet high, colored lights shoot reddish rays through little slits. From the outside it looks like cracks in the rock that are ready to spew lava.
Millions of gallons of water flow through the volcano and lagoon via a complex system of pumps and filters.
Everywhere you look there are tanks and lines for various gases that produce all those oohs and aahs. Atop the volcano is a massive maze of pipes, tanks and whiz-bang gizmos. The team climbs, crawls and cleans every inch of the volcano, tightening one thing and welding another.
Nightly shows run every 30 minutes from dusk until about 11 p.m., depending on the season. The show shuts down when the wind exceeds 10 miles an hour. If a tourist tries to climb the volcano, a ring of infrared sensors will also stop the show.
Standing atop the volcano, one gets more than a tan. A melted face is more like it. One can feel like a hot dog cooked on a campfire. But from the Volcano Man's perch the view is overwhelming.
Fortunately, no human sacrifices were made during the production of this news story.