The Charlie Hedbo satire magazine was first published in 1970 after a similar publication, Hara-Kiri, was banned for mocking the death of former French President Charles de Gaulle. Much of the Hara-Kiri staff moved to Charlie Hebdo, named for Charlie Brown cartoons. Hebdo is short for hebdomadaire, the French word for weekly.

The morning of January 7th, 2015, terrorist in Paris, France, killed 12 people in a shooting at the offices of Charlie Hebdo.

Ten were journalist who were attending a weekly editorial meeting. Two were police officers.

Below are some of the cartoons published all over the world following the horrific attack in Paris. The suspects are still at large.

"I am not afraid of retaliation. I have no kids, no wife, no car, no mortgage. It surely is a bit dramatic but I'd rather die on my feet, than live on my knees" – 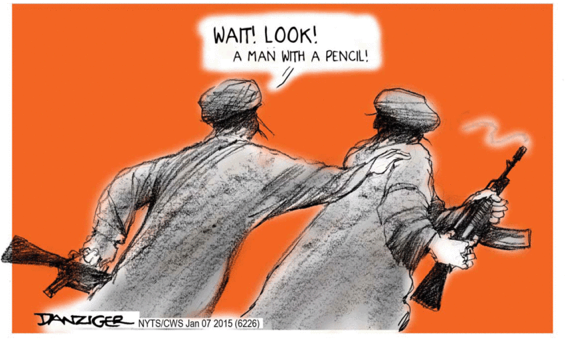