Keep Calm and Carry On was a motivational poster produced by the British government in 1939 in preparation for the Second World War.

The poster was intended to raise themorale of the British public, threatened with widely predicted mass air attacks on major cities.[1][2] Although 2.45 million copies were printed, and although the Blitz happened, the poster was never publicly displayed and was little known about until a copy was rediscovered in 2000. It has since been re-issued by a number of private companies, and has been used as the decorative theme for a range of products.[3] 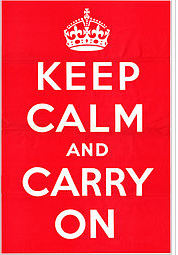 The Keep Calm and Carry On poster was designed by the Ministry of Information during the period 27 June-6 July 1939.[5] It was produced as part of a series of three "Home Publicity" posters (the others read "Your Courage, Your Cheerfulness, Your Resolution Will Bring Us Victory" and "Freedom Is In Peril. Defend It With All Your Might"). Each poster showed the slogan under a representation of a "Tudor Crown" (a symbol of the state). They were intended to be distributed in order to strengthen morale in the event of a wartime disaster, such as mass bombing of major cities using high explosives and poison gas, which was widely expected within hours of an outbreak of war.[2]
A career civil servant named A.P. Waterfield came up with "Your Courage" as "a rallying war-cry that will bring out the best in everyone of us and put us in an offensive mood at once".[2]
Detailed planning for the posters had started in April 1939 and the eventual designs were prepared after meetings between officials from the Ministry of Informationand HM Treasury on 26 June 1939 and between officials from the Ministry of Information and HMSO on 27 June 1939.[5] Roughs of the poster were completed on 6 July 1939 and the final designs were agreed by the Home Secretary Samuel Hoare, 1st Viscount Templewood on 4 August 1939. Printing began on 23 August 1939, the day that Nazi Germany and the USSR signed the Molotov–Ribbentrop Pact, and the posters were ready to be placed up within 24 hours of the outbreak of war.[5]
Almost 2,500,000 copies of Keep Calm and Carry On were printed between 23 August 1939 and 3 September 1939 but the poster was not sanctioned for immediate public display. It was instead decided that copies of the poster should remain in ‘cold storage’ for use after serious air raids (with resources transferred to Your Courage and Freedom is in Peril). Copies of Keep Calm and Carry On were retained until April 1940 but stocks were then pulped as part of the wider Paper Salvage campaign.[5]