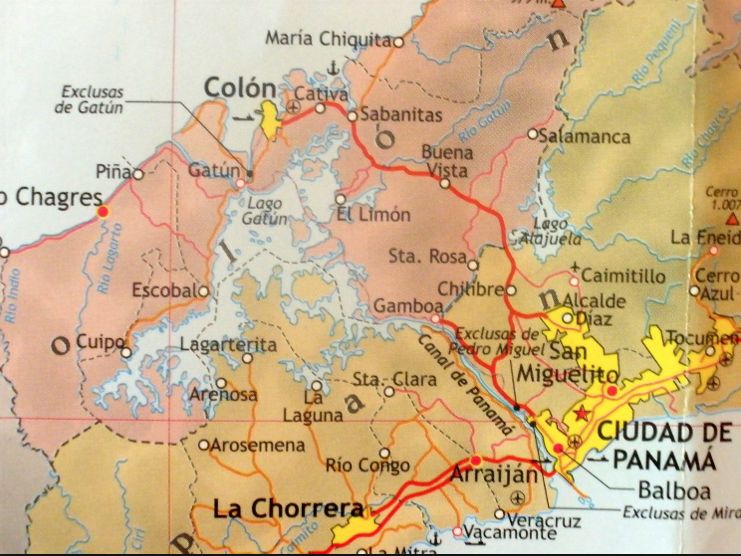 It was a regular afternoon outing with Grandma Chichi, like every other time we’d gone from the Linda Vista finca in Arraijan to Panama City. Pablo, the finca foreman and sometimes chauffer, drove us the 15 or 20 minutes into the city across the Pacific Ocean via the beautiful Bridge of The Americas. 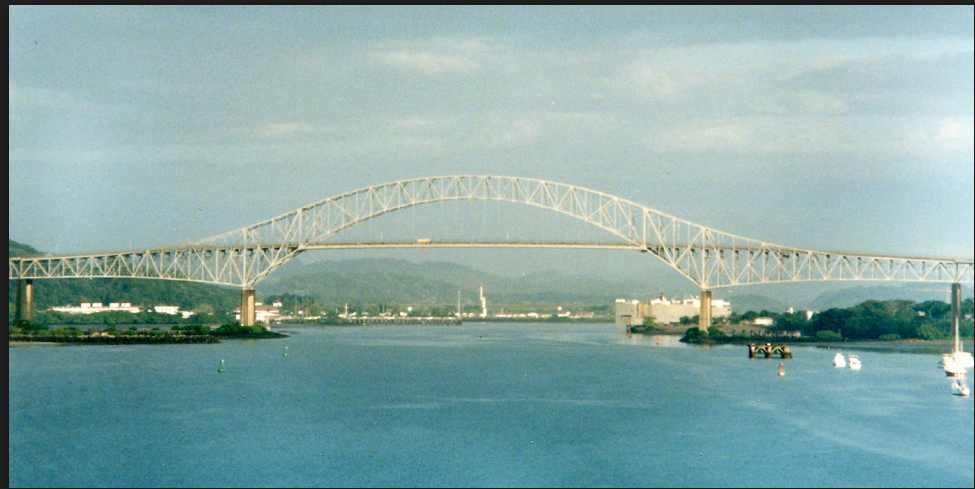 Pablo always knew the appointed time, he dressed in black trousers, a white pressed Guayabera, black shoes and black socks. The car was always clean, many times, just washed. Grandma Chichi would plan the outings to Panama City 2 or 3 days in advance. If she was going to the local town square in Arraijan to buy eggs and vegetables and see Mario, those outings were impromptu.  Pablo knew the exact routine for both.  One was very familiar, no preparation, no script.  The other choreographed, everyone had a part, Grandma was certainly the director and producer, but never the star.

She loved the excitement of going to Panama City knowing full well she was never getting out of the car.  Prior to my Grandfather’s passing, he did most of the shopping when he traveled into the city, Grandma did not go out often.

At this point in her life, my Grandma’s health had declined, she was overweight and walking was not easy. Certainly she made the effort, but she preferred to shop from the window of her car.  We all played our parts and it worked.

The excursions to the Arraijan town square were easy. She knew exactly who she’d encounter, she didn’t worry about her hair and make up and she rode in the front passenger seat in her “bata”.  The batas are made of light cotton material, always with a colorful pattern of flowers, or birds or butterflies.  In Panama every woman in her senior years has a set of batas. It is the only way to manage the hot humid tropical days especially if you are not running the air conditioner.  For the Arraijan outings, Grandma Chichi was comfortable being comfortable, and in her simple cotton house-dress she went.

The Arraijan shopping was always in the morning and enjoyed by all. Back then Arraijan was a tiny pueblo, the first stop for anyone traveling from Panama City to the interior of the small republic.  It was the kind of pueblo where everyone knew each other’s children, cows, goats, chickens and dogs.  Very few people owned cars, so when Dona Chichi’s car came up the incline that ended in the town square, the street vendors knew exactly who was on the way.

Over the years relationships were forged with the “special lady” who sold the eggs, with the family that grew the “best lettuce and tomatoes” and with “Mario”, the town butcher, loved by all.  Mario was big and tall, a happy round man. His head adorned with dark thick wavy hair.  He was boisterous and always made my Grandma feel welcomed and special. If I remember correctly, Mario was from Spain or maybe it was Colombia.  I know for sure he was not a Panamanian.

My Grandma knew the exact days of the week to visit Mario, she knew when the sides of beef were delivered and butchered.  She knew the time within a 15 or 20 minute window when Mario would have the cuts ready for her to select. Mario would look out the window of his carniceria, over the white tile counter, see the car and come out and greet her at the front passenger window.  He usually had on a thick white apron, adorned with splats of blood and always his black industrial rubber boots. They would exchange pleasantries, their relationship formal and endearing.

My Grandma would detail exactly what she wanted and the meat cuts were brought to the car for her to select. The routine always completed in 10 or 15 minutes and we would be on our way. The meat purchases were always first, the vegetables next and the eggs last.  The Arraijan outings short, friendly, prescribed.

My Grandma always coached Pablo on his driving.  She wanted him to drive slow and to be on the lookout for children to young to know about the danger of cars.  She was very observant. She always commented on the flowers, the number of ladies selling lottery tickets and she loved waving at all who recognized her in the car.

The shopping trips to Panama City were much more formal. Even though my Grandma knew she was not getting out of the car, she wanted to be ready with her hair and make up incase someone spotted her in the Riba Smith parking lot. Back then the Riba Smith was “the grocery store” in the city.  While there were many street vendors and markets throughout, the Riba Smith was one of the few traditional grocery stores with shopping carts and registers with checkers, etc.  Panama then was much simpler, much smaller and familiar.

My Grandma enjoyed these excursions into the city; for 1 or 2 hours she could step into a world completely different than the finca. She always looked out the window and commented on what she thought was going on in the store, or in the pharmacy, or wherever Pablo went into shop.  Sometimes, Olinda, would come with us. She was the lady that did the cooking and cleaning at my Grandma’s house.

The outing to Panama City on this particular day included three stops.  Grandma planned for Pablo to stop at her usual two places, the Riba Smith and the amazing fruit and vegetable market ran by a man everyone called, El Chinito.  About ½ way between Arraijan and Panama City, a Chinese family had a vegetable farm and market and for years, many years, my grandparents were loyal customers. The kind of loyalty recognized by the honk of a horn and the make and model of their car. 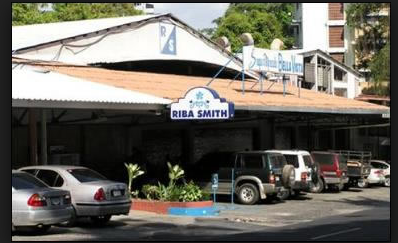 This particular afternoon the third and special stop was planned for Joyeria Mercurio, a family owned jewelry store on Samuel Lewis Boulevard.  At that time, the manager of the jewelry store was Felipe Jelenski.  He was married to one of my Grandfather’s grand nieces, so everyone at Mercurio knew Dona Chichi Arosemena.  My Grandma’s planned purchase that day, a crucifix for my first cousin, Rossana, to wear on her wedding day.  Mercurio had been around for years, my Grandma knew that Felipe would have the crucifixes for her to select and purchase.

The jewelry store was on a busy street, it was a standalone cement building with a parking lot out front for 10 or 12 cars.  The store had one main entrance, 2 large glass doors under the careful watch of an armed security guard.   That afternoon Pablo parked to the left of the main entrance.  I remember the car was less than 10 feet away from a display window with shiny Rolex watches.

As planned, I got out of the car, went into the store, asked for Felipe and explained who I was and what my Grandma was looking for.  I told Felipe that Dona Chichi could not get out of the car and his response, “For me not to worry he would bring the jewelry outside”.

I went back to the car, got in the back seat and 3 or 4 minutes went by.  I had no idea how this was going to play out, Felipe I think had done this before. He came out of the store with a small black case in hand.  As he got to the passenger window, the guard got closer to the front of the car.

Felipe greeted my Grandmother, he called her Tia Chichi and kissed her on the cheek, the customary greeting in Panama.   He acknowledged what she was looking for, told her he was happy to help her and then leaned into the front passenger window. He opened the small black case, there were 3 or 4 small crucifixes resting on beautiful black velvet material.  Felipe explained the details and price of each piece, he confirmed that Rosanna would be wearing the crucifix as a pendant, he made is recommendation and a decision was made. The one selected was a small cross, all gold covered with pearls.  It was elegant, delicate and fitting for the occasion.

I was in the back of the car smiling and thinking only Grandma Chichi can get away with buying beef tenderloin and jewelry from the front passenger window of her car.  Felipe went back to the store to get the package ready and bring the purchase receipt.  As we’re waiting, I made a comment about the Rolex watches in the display window, something about Mercurio being a certified Rolex dealer in Panama.  I was being observant, trying to keep busy, I read the sign out loud and my Grandma immediately asked, “Do you want to look at some of those?”

She quickly added, “Go in and tell Felipe to bring out a few of those watches so I can buy you one today.”

I hesitated, she urged me. Pablo looked at me and smiled.  The kind of smile that says “Hmmm I think something good is about to happen.”

So out of the car I went back in the store.  Again 3 or 4 minutes later, Felipe comes out with the same black case.  He leans in and opens the case and there are 2 watches. One was all silver and one was silver and gold.  My Grandma looked at me and said “Which one do you want?”   She handed me the gold and silver watch, I gasped at the price tag as she said, “Is that the one you like?"  I said yes and that was the end of the discussion.

Felipe acknowledged the sale and went back into the store.  I asked my Grandma once or twice, are you sure you want to buy the watch today and she said “Yes”.  Felipe came back out with two small packages and a receipt. My Grandma got her checkbook from her black purse by her feet and paid for the purchases.

The checks were in a blue plastic case, they were the long business style checks, with a stub on the left hand side where she recorded the details.  I remember my Grandmother’s beautiful handwriting, slow and deliberate. Writing the check took almost as much time as the entire purchase. She was never in a hurry or maybe I was in shock.

When she finished she handed the check to Felipe. He thanked her again and said he was very glad to see her in the city.  She got the customary kiss on the cheek and good byes were exchanged.

Pablo knew exactly how long to wait before asking if she was ready to go.

“Dona Chichi ya” ?  Pablo said as he smiled back at me again.

I knew my Grandma was happy to be going back, her big outing complete. The ride back to Arraijan maybe 20 or 25 minutes from where we were. We were mostly quiet on the way, this is how she usually was. She was very practical, her mission accomplished, now she was preparing for the afternoon at home. There was usually a long comfortable nap, followed by an early light dinner.  And then we would watch novelas and her favorite show, McGyver. Or as she would pronouced, "Magiver."

On the way back to Arraijan, I opened the package with the watch.  I carefully handled the dark green signature Rolex box and studied all the details of the watch. All the details of the manual. The tiny price tag had been removed and replaced with an official Joyeria Mercurio receipt. I remember thinking, no one is going to believe this story when I get home. 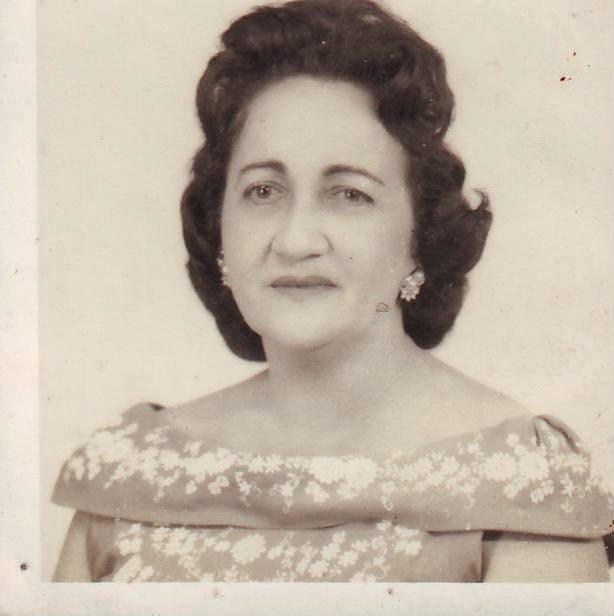 I don't own the watch anymore.

What I do own and cherish is the knowledge and experience of her love.

Every beat of my heart, every minute of everyday, honoring the time she was present in my life. Her influence serious, splendid, significant. 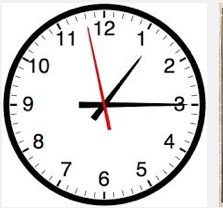