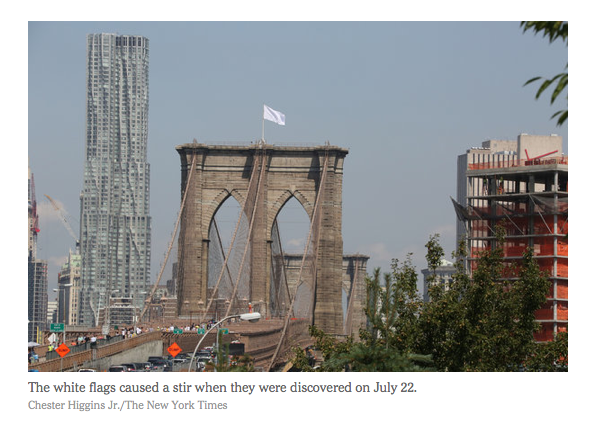 Two Berlin artists say they hoisted big white flags atop the Brooklyn Bridge last month to celebrate the span's beauty and the death of its German-born American engineer, The New York Times reported Tuesday.
Mischa Leinkauf and Matthias Wermke told the newspaper that swapping the usual U.S. Stars and Stripes with their hand-sewn flags was neither terrorism nor anti-Americanism.
They also said they were surprised by the reaction to their art escapade and had not intended to embarrass the New York Police Department by evading the bridge's constant surveillance.
"We saw the bridge, which was designed by a German, trained in Berlin, who came to America because it was the place to fulfill his dreams, as the most beautiful expression of a great public space," Leinkauf told the Times in a phone interview from Germany. "That beauty was what we were trying to capture."
The flags were raised before dawn July 22, the day in 1869 that the engineering mind behind the suspension bridge, John Augustus Roebling, died.
Leinkauf, 37, and Wermke, 35, provided "slightly cryptic pictures and videos of the flags, seemingly shot at night from atop the bridge," the Times wrote.
They said that between 3 a.m. and 5 a.m. they carried their 11-foot-by-20-foot handmade flags in backpacks and climbed cables to the top of the twin stone towers. Lights illuminating the U.S. flags were then covered with aluminum cooking pans while the flags were swapped.
The artists said they followed the U.S. Flag Code and ceremoniously folded the 12-foot-by-18-foot Old Glories they took down. They promised the flags would be returned.
Leinkauf and Wermke would not say whether they had help, but they did note that they saw no security cameras.
NYPD bomb technicians spent several hours checking the bridge for explosives but found none. Police said they have been seeking four "persons of interest" spotted on security camera shortly after 3 a.m. on July 22. 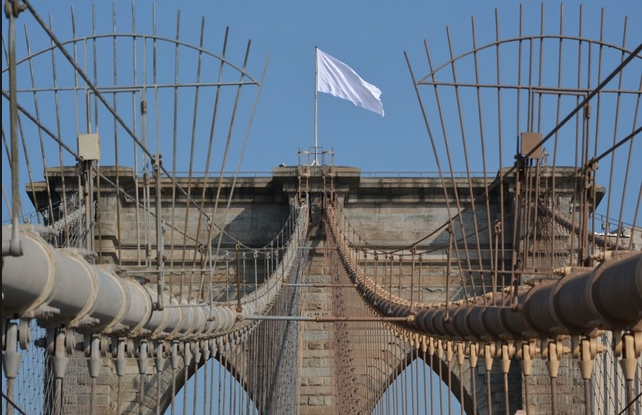