I don't really like baseball, never have, but for one summer in San Diego I was  a season ticket holder for the Padres and it was all because of Tony Gwynn.

Two of my all time favorite sporting events memories both with the Padres and both because of Tony Gwynn.  I had tickets for a Sunday series, the seats between home plate and 3rd base, up in the 3rd section of Qualcomm Stadium.  It was a blast.

The game that got me hooked, tied at bottom of the 9th, 2 outs, 2 strikes with Tony Gwynn at bat.  And yes, just like a scripted movie, Tony hit a home run and the Padres won the game.  The fans loved, loved, Tony Gwynn.

It is sad to read the news today of his death at the young age of 54. 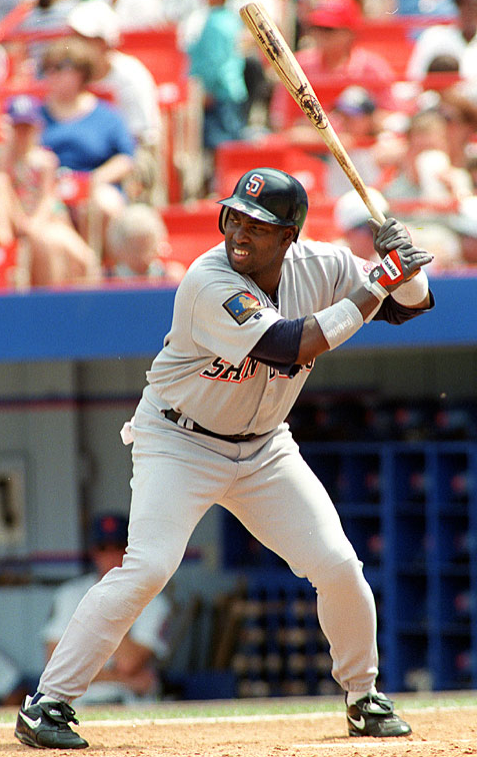 I loved Tony Gwynn. Who didn't?
Once you met him, you couldn't help but fall in love with him.
That infectious laugh. That perpetual smile. That warm embrace.
He was the greatest pure hitter I ever had the privilege of covering as a baseball beat writer.
He was also the greatest person I ever had the privilege of covering.
It's hard to believe, that at the age of 54, he is now gone, the latest casualty from cancer.
The baseball world just took a fastball into the ribcage.
Man, are we going to miss him, but never, ever, will we forget him.
I'm not talking about his career, a .338 hitter with eight batting titles and 3,141 hits.
I'm talking about the person.
He was the greatest player to ever wear a Padres uniform.
Really, he was the greatest person to ever don the uniform.
HALL OF FAMER: Tony Gwynn dies at 54
You ask anyone who ever came in contact with the man, and they'll tell you the same.
This is a guy who treated bat boys with as much respect as the club president.
If you came in with a TV crew from 60 Minutes, or were a high school writer from San Diego, he'd give you the same professionalism.

MLB
A look back at Tony Gwynn
He never looked at your name tag to find out your affiliation. He didn't care if your newspaper circulation consisted of dozens of kids from the neighborhood or millions in New York, you were equals in his mind.
He was visible, accountable and friendly to all, truly the first to arrive every day, the last to leave.
If you couldn't find him in the clubhouse, he was in the batting cage or the video room.
If you wanted to find him at the team hotel after games, just knock on his door. He'd be studying video, or playing video games.
Never once would you see him at a hotel bar, let alone a night club.
Really, you almost feel guilty at times when you talked to Gwynn, feeling you should share your paycheck with him.
You wanted a story, you plopped your chair in front of his locker, and he'd write it for you.
You wanted to write about a Padres teammate, talk to Gwynn, and he'd write it for you.
You wanted to talk about what made Barry Bonds tick, you talked to Gwynn.
You wanted to talk about hitting, well, you better have a few hours to spare.
Gwynn never shied away from any topic.
He used to cringe at the heavy usage of amphetamines in the clubhouse.
He used to mock the abuse of steroids around baseball.
If you wanted the truth, you talked to Tony.
Gwynn has been battling cancer for the last four years, but never did he want anyone to feel sorry for him. Please, he requested, no sympathy.
Doctors found cancer in a salivary gland in 2010, and he underwent multiple surgeries. Gwynn figured it was from his use of smokeless tobacco. No one knows for sure. But his body slowly deteriorated, and in March, he was forced to take a leave of absence from his head coaching job at San Diego State, his alma mater.
He never put on the uniform again.
Philadelphia Phillies center fielder Tony Gwynn Jr. knew his dad was struggling, and told CSNPhilly.com that the last time his dad even talked about baseball with him was in spring training.
That's when he knew how bad his dad was hurting.
"For us not to talk about baseball for that long, it's been difficult, I'm not going to lie,'' Gwynn Jr. said this past weekend. "Even when I didn't steer the conversation to baseball, he steered the conversation to baseball. So that lets me know how he's doing, really, the fact that he doesn't even bring up baseball.''
Gwynn, who used to enrage some officials in the players' association for signing inferior contracts instead of testing the free-agent waters, never wanted to leave San Diego. It was home. Sure, he could have made mountains of money playing elsewhere, and might have earned a degree of fame commensurate with his stature as a hitter.
He didn't care.
Gwynn's teams made the playoffs three times in his career, including two World Series. He led the San Diego State Aztecs to the conference playoffs. He coached Stephen Strasburg, and Tony Jr., too, on those teams too.
He made everyone around him not only a better player, but a better person.
It was a privilege and honor to have known the man.