Last week I was reading Time Magazine, the one with the barbed wire Olympic rings on the cover along with the ski jumper with # 14 on his chest.  I read Time like I always do, in bed with pillows propped up with the light on the night table as close to me as possible.

I turned the cover page and reviewed the table of contents like I always do,  I read the managing editor's note from Nancy Gibbs, the first woman to hold this title and role at Time.

Then I turned to the Briefing page, its the one with the quotes collected from people and events of that week, some comical, some sad, some simply stupid and/or outrageous.

Then I turned to what is always next the Briefing LightBox photo, always the width of the two pages and with this edition I was emotionally impacted, the children's portraits startled me; the power and beauty of their eyes made me stop breathing for some seconds.

I sat straight up and was drawn again and again to their eyes, I was pulled to the magnets set in each of their tiny sockets, I was so taken by this picture I got tears in my eyes.  The photos are so powerful, they surprised me on so many levels. I was not expecting these tiny, beautiful, innocent faces. 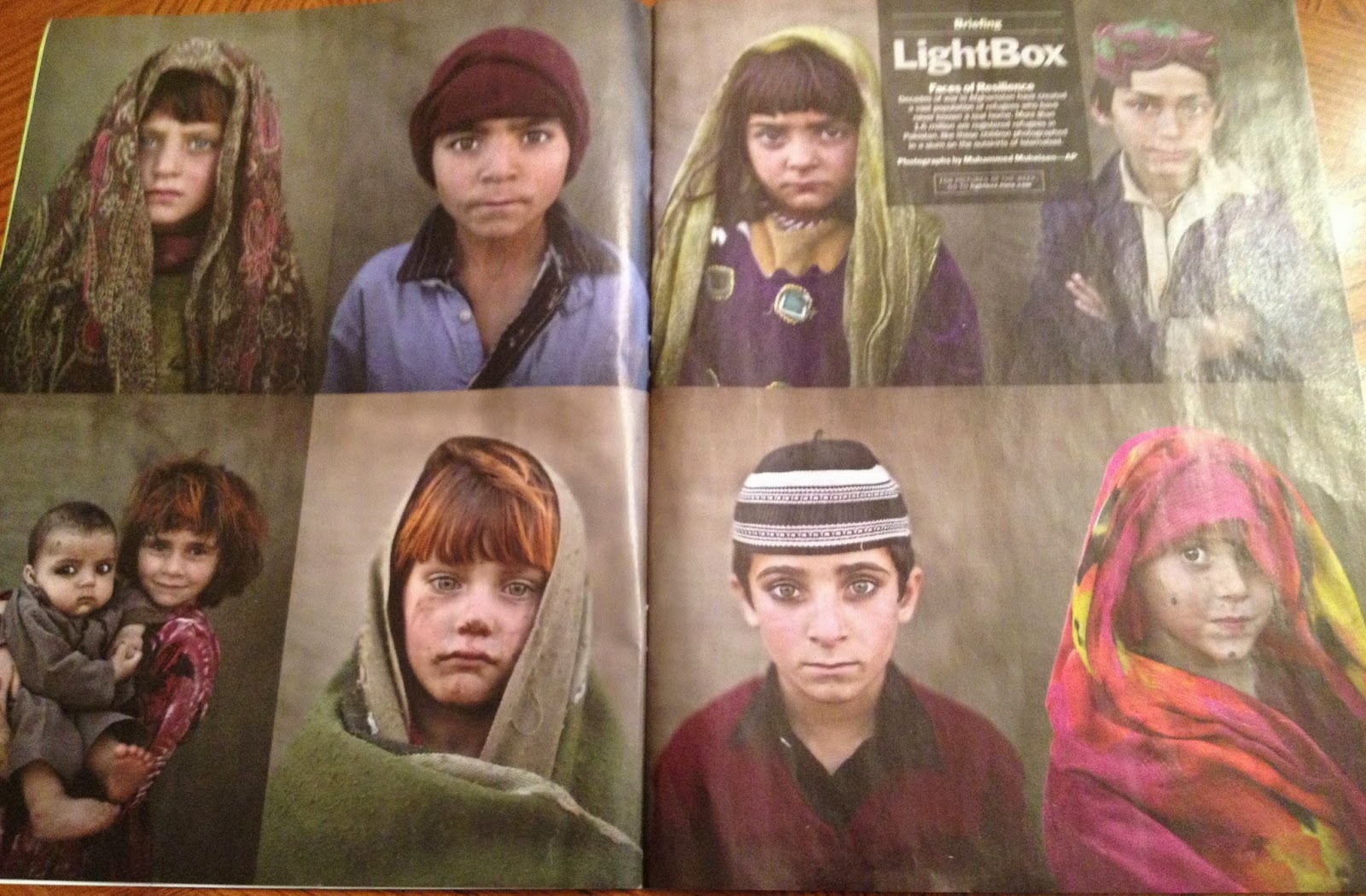 My immediate reaction, I wanted to share the pictures, I wanted to see if others would have the same reaction.  I was home alone.  I then began to study their faces, their hats or head covers and then again the eyes. I was so moved by these pictures,  I wanted to know their names, these tiny people that Time referred to as Faces of Resilience, aka refugees, children of the world.

I love the photos, the colors, the clothing, the arrangement of the nine children, how beautiful and innocent they are and I wanted to know their names. I could not stop looking at the pictures.

A few minutes later after searching via the iPad for the photographer, Muhammed Muheisen, I found out he was named the Time Magazine Best Wire Photographer of the year for 2013.

Muhammed originally from Jordan, currently based in Islamabad is widely known for always including photographs of children in all of his AP assignments.

The children in the February 10th issue of Time were photographed in a slum outside of Islamabad, the last week of January of 2014.

For all the details you can access the photo essay at lightbox.time.com - or click the link below. If you have any interest in photography Lightbox is a great link to bookmark.

I love the quietness of this hour,” Muheisen tells TIME, adding that he seeks out “scenes that carry a message of life or joy. It is not only my project, but my passion.”

Nathalie Bardou—AP
Muhammed Muheisen shows Afghan refugee children how his camera works in a poor neighborhood on the outskirts of Islamabad.
Although many of the children he photographs are refugees, living on the edge of conflict, Muheisen’s images often capture the innocent cheer and simplicity of his subject’s life, all while managing to evade the countless photographic cliches that such scenes so often present. Born in Jerusalem, Muheisen is no stranger to conflict himself, and his later experiences covering wars in Iraq and Syria have reinforced his commitment to illuminating the lives — and the struggles — of his subjects.
“All the children of the world share something in common, wherever they are from,” he says. “An image of boys and girls skipping rope: that could happen anywhere in the world. Children are powerless, and I always do my best to let my image be their voice, and let my picture carry their voice to the outside world.”
Viewers everywhere are richer for Muheisen’s compassion, his devotion to his craft and his unwavering, unblinking engagement with the lives and the issues around him.