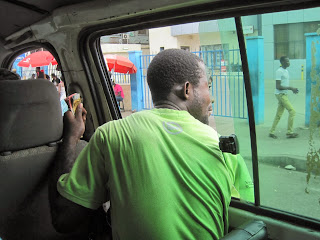 This is the trotro mate on the way back today, he had an amazing voice and call. His job is to call out the route of the station the troto is headed to, our route today was going to New Town Achimota - and he has to call it out quite loud as he is competing with other mates from other trotos and also the noise of the traffic.

He is also in charge of collecting the fare from all the passengers.