Make Time for Me, Make time for Me 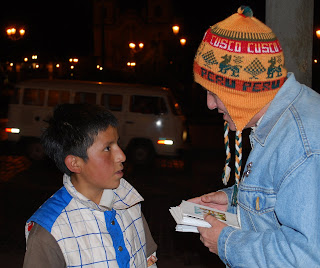 What I most love about travel are the experiences along the way that are not planned or programmed by any guide or tour book, the encounters scheduled by fate, by the stars, by that higher power that sets the course for our lives.

Last night as we walked around the Plaza de Armas, as you would expect there were vendors selling, trying to get your attention, eating establishments with people outside trying to lure you in. A little boy with jet black hair and fountain black eyes, probably 7 or 8 approached me with a batch of small water color paintings and said with a very thick accent, MAKE TIME FOR ME, MAKE TIME FOR ME.......


I immediately asked him what his name was and he said with a big smile , Barack Obama. He timing and delivery great, I laughed. I asked him his real name and he said Marco or Mark.

I told him we were going to eat at the Inka Grill and that I would chat with him and look at his prints when dinner was over. And yes about 9pm, he and his 2 other buddies were outside waiting. I took him aside, looked at his prints and told him I would buy one and that I also had a gift for him. The print was 10 Soles, which is about $3. Along with that I gave him a $10 bill and told him to be sure 1. to not to tell his to buddies, and 2. to make sure he took the money home and spent it on something for him and his family, like food.

I asked him where he lived, he said up in the mountains about a 20 minute bus ride from the plaza. As we were having our very brief and intimate conversation, he said, Senora what are you doing tomorrow morning ? My school is having a celebration for Mother's Day, can you come, I want to invite you to come, it is at 10 in the morning. He told me the name of his school and where to go.

I told Marco that I was not going to be able to make his school function but that I would seek him out in the square this afternoon and invite him for an ice cream. He told me he was 1 of six children, all the others in his family girls and that he has a twin sister or a melliza.

As I was leaving he said, Senora you are very good, thanks for being so good to me, we both shook hands and walked our separate ways.

While I know that $10 certainly wont change Marco's life, the brief moments we spent together touched my life, his gift to me a brush stroke of deep, rich favorite colors on the canvas of my heart. I know I will remember his Barack Obama smile forever.

I hope I find him this afternoon so we can go for ice cream.